Thirteen years ago today, Hurricane Katrina came onshore in eastern Louisiana. While the winds were down to 75-80 mph, the storm surge was massive, in some places higher than 28 feet, and wiped out blocks along the coastline stretching from the Florida Panhandle well across most of Louisiana. Two days later, New Orleans started to flood as the levees collapsed from the force of all the water, resulting in a catastrophe that included the deaths of over 1,700 people and became the costliest hurricane in US history. Quartz has provided some photos to remind us of just how devastating that storm was.  You can view them at https://qz.com/1372247/the-destruction-wrought-by-hurricane-katrina-seen-from-the-air/. 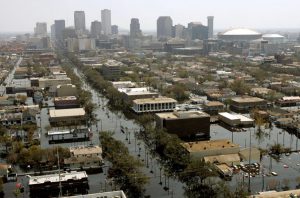