Wildfires out west cover an area the size of Maryland

While most of us in the Southeast are focused on dealing with the reality that is Irma, producers in other parts of the US are dealing with their own disasters.  I will discuss the impacts of Harvey tomorrow.  Today I want to discuss the wildfires out west, which have covered a huge amount of territory.

Back in August, the Washington Post published an article discussing the burning of grasslands in Montana and its affect on livestock producers in the area.  You can read that article here. This week the Washington Post followed up with another story about how those fires and additional blazes have covered a large portion of the West, bringing poor air quality and destroying millions of trees and many buildings in the region. This article discusses the impact of the wet winter, which caused lush growth of grasses that then dried out in the exceptional drought of the last few months, providing fuel for the fires.

Here is a spectacular video from The Guardian showing just one wildfire covering the hills along the Columbia Gorge between Washington and Oregon. 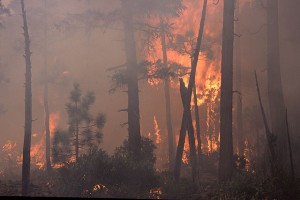