This week NOAA released their latest report, the fifth edition of Explaining Extreme Events from a Climate Perspective, which presents 25 peer-reviewed research papers that examine episodes of extreme weather of 2015 over five continents and two oceans. It features the research of 116 scientists from 18 countries analyzing both historical observations and changing trends along with model results to determine whether and how climate change may have influenced the event.

Evidence for human-influenced climate change was identified for:

No climate change signal was found for:

You can read more about it in their media release at https://www.noaa.gov/media-release/scientists-strong-evidence-human-caused-climate-change-intensified-2015-heat-waves. 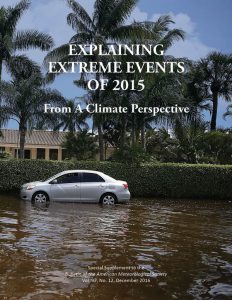