National Geographic had a recent article describing changes in the way that Egyptian farmers are having to make in their traditional ways of farming to deal with changes in the flow of the Nile, the source of most water for agriculture in the country.  The flow of the Nile has changed due to the building of dams such as the Aswan High Dam but has also been affected by changes in climate as well as the introduction of fertilizers and other chemicals.  You can read the story at https://www.nationalgeographic.com/people-and-culture/food/the-plate/2016/12/batter-by-climate-change–egypt-s-farmers-head-back-to-school/. 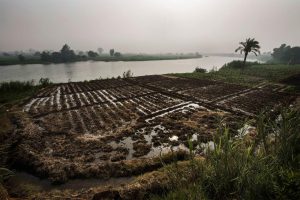 Farmed fields like these on the banks of the Rasheed River, an offshoot of the Nile, rely heavily on the river for agriculture.
PHOTOGRAPH BY GIANLUIGI GUERCIA, AFP/GETTY