Wet and dry extremes across the Southeast in October

With just a couple of (mostly dry) days left in October, the Southeast Regional Climate Center’s Perspectives map shows the huge variation in rainfall across the Southeast.  Charleston and Columbia have set new records for October rainfall in the large storm that hit them early in the month.  By comparison, a number of stations in Florida are in their top ten driest on record, including Key West.  Key West’s ranking is likely to drop by the end of the month, however, as some rain is predicted for them.  You can make your own map at https://www.sercc.com/perspectives . 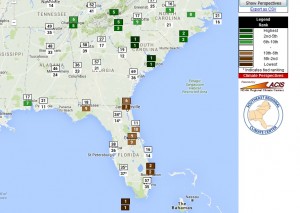