Death of 90,000 rare antelope in ten days may be linked to climate

Tengri News reported on the mass death of over 90,000 rare Saiga antelope in Kazakhstan.  In the past ten days, the antelope have died at an alarming rate, leading to the death of almost 40 percent of the known population of these migratory antelope.  Scientists are still trying to determine the cause of so many deaths.  You can read the story here.

The last mass death, of 926 animals, occurred in May 2012 due to pasteurellosis, an acute infectious zoonotic disease.  This may be the case again this time, since the antelope are more susceptible after a cold winter.  Some scientists point to the lack of fodder due to a drought last year.  A third possibility that scientists are now focusing on is ingestion of some poisonous weed which may have invaded the area.  The scale of the death is unprecedented and it appears that the deaths are now spreading to other areas of the antelopes’ range.  Local officials are having a difficult time dealing with the huge number of animal carcasses.  All of the deaths were of females and lambs, who live separately from the stags this time of year. 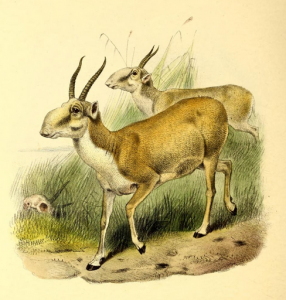