The rest of the year

With only two weeks to go in the year, it is worth taking a first look at how the year is likely to end up.  The maps below show the temperature and precipitation departures for the year to date.  These maps are from the High Plains Regional Climate Center and you can update them at https://www.hprcc.unl.edu/maps/current/.  The maps show that for most of the Southeast, the annual temperature should end up a little more than 1 degree below the 1981-2010 normal.  This will be colder than last year and most likely the coldest since 1996.  Precipitation varied quite a bit across the region.  For example, in Georgia the northern 2/3 of the state was four to five inches below the 1981-2010 average while the southern third of the state was three to four inches above normal.  For the entire state and year, Georgia is likely to be a bit on the dry side but the two halves of the state will counteract each other to some extent.  It’s worth noting that by comparison to other parts of the country, the Southeast has been relatively close to normal, both in temperature and precipitation. 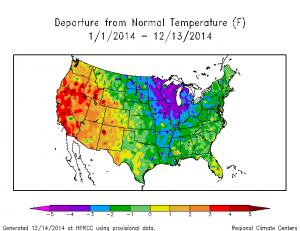 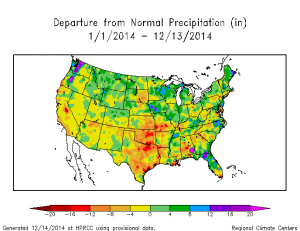 For the rest of the year, weather conditions in the Southeast are likely to be wet but do not lean either warm or cold (maps at www.cpc.noaa.gov).  We do have some indication that there may be a couple of large storms moving through the country that may cause problems for travelers, although it is not clear how much they will affect the Southeast.  If you have travel plans for the coming weeks, you will want to follow the weather predictions closely.