My meteorologist and climatologist friends have been posting one story after another about the extreme cold weather we have experienced in the past day.  Today many areas set records for low maximum temperature, and some record lows were set.  Tomorrow morning, many more record lows are expected to be broken.  The Southeast Regional Climate Center posted a map produced using their Perspectives tool which shows that for most of the Southeast, the forecast temperatures on the morning of the 19th should set records for both individual stations and for threaded records (note #1 rankings across most of the Southeast).  Threaded records are city records which combine the actual observations of weather conditions for the entire period of record for a city by combining all the official historical records sequentially into one seamless record over time.  They are not useful for looking at long-term climate trends since they have not made corrections for station moves such as from downtown to airport sites and changes in the time of observation or instrumentation, but they have been used by media outlets and the National Weather Service over time to provide “official” daily records. 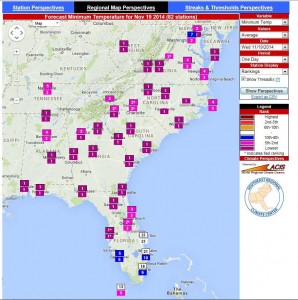 One of the consequences of the cold air flowing out of Canada is the tremendous lake effect snow that has been generated downwind of the Great Lakes.  My hometown, Grand Rapids MI, received over a foot of snow in the past day as icy air blew over the relatively warm lake water, creating significant snow showers in the area.  But this pales in comparison to the 5-6 feet of snow received in some areas near  Buffalo NY, where nearly constant winds set up a stationary snow line to the east of the city.  The video linked below shows the amazing snow showers coming off the lake and the near-zero visibility in some areas.

Fortunately, the cold weather is expected to ease by the end of the week, and the Southeast may see temperatures near 70 F next weekend.  But cold weather may return again after that, so keep watching the forecasts if you have outdoor work planned.