October precip across Georgia has been variable

The National Weather Service radar-estimated precipitation for the month of October so far has been feast or famine across Georgia.  The northern and western portions of the state have received up to 400 percent of normal in the far northwest, while east central Georgia has received 25 percent or less of its normal October rainfall.  The storms that dropped significant rain earlier this week (I had  2.5 inches in Athens and there was almost 5 inches in Rabun County) died out as they moved eastward, leaving eastern parts of the state relatively dry.  You can see maps like these at https://water.weather.gov/precip/. 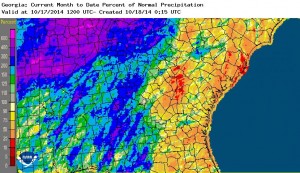