NOAA issued its official forecast for the Atlantic hurricane season this morning.  The number of storms is predicted to be less than normal, due mainly to the expected onset of El Nino later this summer, which usually tends to suppress hurricane activity.  However, even one storm can have significant consequences if it makes landfall in a vulnerable area.  For example, Hurricane Andrew occurred in an El Nino year but caused huge amounts of damage in south Florida and lesser amounts in Louisiana when it made a second landfall there.  NOAA forecasts are statistical based on the entire season and do not give any indication of where these hurricanes might go.  For more information, click here. 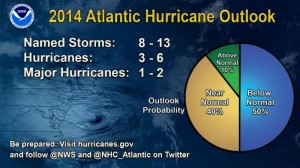