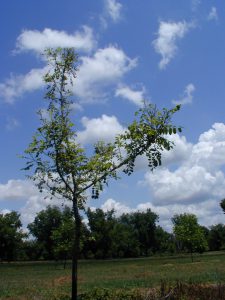 Each year it seems there is a particular problem that pops up a little more commonly than normal. So far this year, I would say that problem is mouse ear. If you notice small, rounded leaflets or in severe cases, extreme rosette of the foliage, mouse ear, caused by a deficiency of nickel (Ni) is the problem. Mouse ear occurs most frequently on newly transplanted trees in established orchards, but can also occur on sites where pecan has not previously been grown.

Other symptoms of mouse ear include dwarfing of tree organs, poorly developed root systems, delayed bud break, loss of apical dominance, necrosis of leaflet tips, and reduced energy storage by the tree. Symptoms may occur throughout the entire tree, or sporadically throughout the canopy, often evident only on a single major limb or terminal shoot. Mouse ear may consistently reappear from year to year, or may appear only occasionally, on the same trees. The degree of mouse ear severity within the tree canopy typically increases with canopy height. 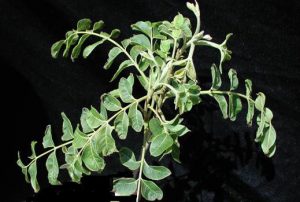 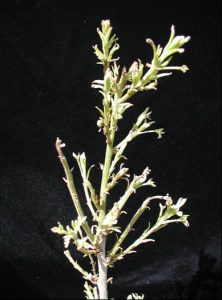 A variety of abiotic and biotic factors may influence mouse ear. I think the main culprit this year is the odd weather we’ve had, most notably the drought last fall and the late freeze in mid March. Severely affected orchards typically have high soil levels of zinc, calcium, magnesium, and phosphorous, but are low in copper and nickel. These orchard soils are also normally acidic and sandy in texture, with low cation exchange capacities. Nematodes can be associated with the roots of affected trees as well.

Mouse ear is easily corrected by the application of nickel as a foliar spray in mid-late April when the developing foliage is in the parachute stage. Severely affected trees may need another application 30 days after the initial spray and again in late September or early October to prevent mouse ear in the following spring flush. The fall application will ensure that nickel will be stored in the buds and stem tissues over the winter, where it will be available to the tree at bud break. When using foliar nickel sprays, be sure to follow all label directions. Soil applications are not effective. The trees don’t require much Ni but the problem occurs when they cannot remove the little they need from the soil. Foliar Ni and Zn applications can be combined without complications.