Spittlebugs Usually Not Worth Spraying 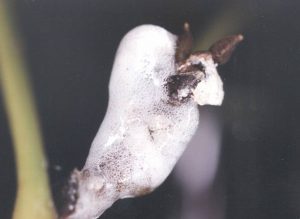 Spittlebugs can be quite obvious in an orchard when they move in. We have had a number of calls lately about spittlebug due to the large number of spittle masses observed in many orchards. While spittlebug can be alarming, they almost never cause any economic damage and growers should not worry about them in most cases. The spittlebug nymphs are found clustered together beneath the frothy mass you see at the base of nut clusters and on the ends of the branches. Two generations normally occur each season in the southeast. The bottom line here is that it takes a LOT of spittlebugs to do any economic damage. There is little evidence that spittlebugs damage a pecan crop. I know of an orchard that had a high spittlebug population nearly season long last year and made over 1400 lbs per acre  (without spraying for spittlebug). Over the last 12 years I have only seen one case where spittlebug control was warranted. If you dig into the frothy mass of spittle and see the nut clusters becoming water soaked (not just wet, but the shuck tissue turning brown), control may be warranted because the nuts can become so water-soaked that they drop off. But again, its a very rare occurrence that it becomes this bad. Imidacloprid is the material of choice for those who are determined to spray for this pest.