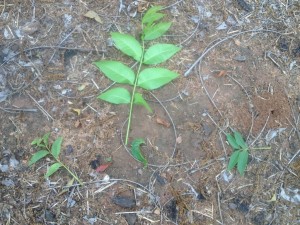 It’s June and temperatures have taken a big jump in south Georgia. Each year when this happens we see leaf drop on ‘Desirable’ trees, as well as a few other varieties. See posts from 2014 and  2015 on this subject. If you observe a little leaf drop at this time, don’t get too worried. Its just the trees’ response to the relatively quick change in environmental conditions. The leaf drop will stop and the trees will be healthy otherwise.

Another thing that routinely shows up at this time of year is leaf scorch and drop on young trees. Symptoms appear first and most severe on sandy soils. Over the years, I’ve looked for various answers to this problem. I’ve evaluated countless leaf samples looking for nutritional deficiencies but nothing ever shows up.  I have always come back around to something affecting the root system. I’ve been leaning toward heavy spring soil moisture and rainfall followed by sudden hot, dry conditions as one culprit. While visiting with a grower today who had this problem, we were looking at the information generated by his soil moisture monitoring system and noticed that soil temperatures over the last few days have been up to 104 degrees at 4″ depth and 95 degrees at 8″. It hit me then that there’s a strong possibility what we are seeing is a result of a rapid increase in soil temperature killing feeder roots at the shallow soil depths, leading to the scorching symptoms and falling leaves that we have been observing. 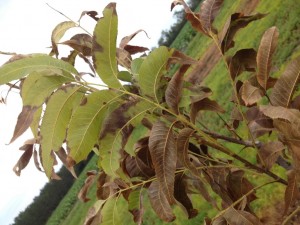 Optimal temperature for pecan root growth is about 85 degrees. When soil temperatures near 100 degrees, feeder roots can die. This is not a long-term threat to the health of the tree because there are plenty of feeder roots down to 32″, and feeder roots continuously die and re-grow naturally. This can explain why over time we normally see trees grow out of this problem. But, when we have rapid increases in soil temperatures, there is potential for a significant amount of feeder root mortality at the shallow soil depths. Anything that limits root growth would magnify this problem because you would lose a greater percentage of the existing root system. This is why we see more severe scorching on sandy soils, soils with poor drainage, etc.