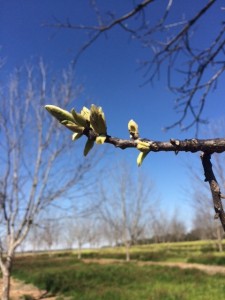 Bud break of pecan has arrived in south Georgia and if you have had problems with phylloxera in the past, it is time to consider making an application for this pest. The southern pecan leaf phylloxera, is a tiny aphid-like insect that feeds on the foliage of pecan trees.  The insects are rarely seen, but the galls that they cause are prominent.  The southern pecan leaf phylloxera is primarily a pest on mature pecan trees, but it can be found on nursery and young trees.  Overwintering eggs hatch beginning the first week of April and continue until the first of May.  The newly hatched stem mothers crawl to the expanding leaves where they settle down and begin feeding.  Feeding causes rapidly growing gall tissue which encloses the immature stem mother within a few days.  Stem mothers mature by mid-April at which time they lay eggs within the gall.

Of much greater concern than leaf phylloxera, a separate species, stem phylloxera can be much more damaging. They produce a hard swelling or tumor like galls, one tenth to one inch in diameter on leaves, leafstalks, succulent shoots, catkins, and nuts of new growth .  Heavy infestations can completely destroy an entire nut crop and the accompanying malformed and weakened, infested shoots reduce tree vitality to such an extent that damage may reduce the following years production. This is rarely seen in managed orchards but where it does occur it needs attention.

Imidacloprid is a good, inexpensive, systemic choice for phylloxera control. Phylloxera sprays should be applied just after bud break or no later than when the leaves are one-third grown. Once galls are  observed it is too late to spray until next year.