Hedging pecan trees has quelled some of the interest in fruit thinning lately. But, there’s much more interest in hedging in Georgia than there are hedging machines to do the job at this point. As a result, most Georgia pecan growers should still consider fruit thinning as the most viable option for relieving stress from a heavy crop load and generating a return crop. Crop maturity in Georgia is about 10-14 days ahead of last year’s crop. This means that its about time to consider fruit thinning on trees with an overloaded crop.

Proper timing of fruit thinning is the key to achieving the desired results. In most years, there is a window of only 10 – 14 days in which fruit thinning can be done successfully. Research has shown that in order to realize the full benefit of mechanical fruit thinning, nuts should be removed when the ovule (cavity inside nut in photo below) is 50% to 100% expanded, but before the kernel enters the dough stage. Thus, the calendar date for fruit thinning of pecan will vary with cultivar and location, as well as from year to year.

After the female flower has been pollinated and fertilized, the ovule (the tissue that becomes the kernel) begins to expand and lengthen from the tip of the nut toward the stem. As the ovule expands, the space inside is filled with a watery substance called liquid endosperm. After the ovule extends to the stem end of the nut, and the nut reaches full size, the shell begins to harden from the tip backward. When the ovule is completely expanded, the kernel begins to fill and nuts pass from the water stage to the gel stage, to the dough stage. 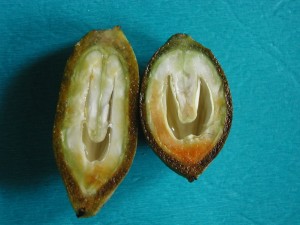 Determination of nut development is done by slicing through the nut to expose the ovule. When the nut is removed from the tree, an oval shaped scar is left on the shuck. To obtain the proper view of the ovule, the nut should be cut lengthwise at a right angle the the long axis of the oval scar. A straight, lengthwise cut will expose the expanding ovule and liquid endosperm within the nut. Thinning should occur when the ovule or kernel has extended to half the distance toward the stem end of the nut. The larger the nut size, the earlier in the ovule expansion period thinning can take place, because larger nuts are easier to shake off the tree.

Mechanical fruit thinning can be accomplished with a conventional pecan tree shaker equipped with donut or cylinder pads. A coating of grease or silicon gel between the rubber flap and the pad will allow movement between the flap and the pad, reducing movement between the shaker head and the tree bark. This is very important in helping to minimize the risk of damaging the tree. The shaker should be positioned as level as possible on the ground with the tree trunk or limb positioned in the center of the shaker head. 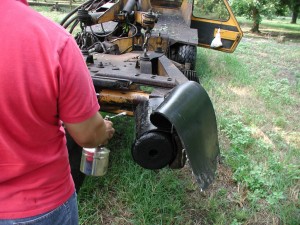 Under conditions of abundant rainfall or high soil moisture, the cambium layer under the bark will slip more readily, making it easier to damage the tree. It may be necessary to delay shaking for a few days following a rain to minimize trunk damage. It may also be a wise decision to turn off irrigation systems a few days prior to thinning until the fruit removal process is complete.

The quantity of nuts to remove varies with a variety of factors, including nut size, cultivar, crop load, and environmental factors. Judging the tree’s crop load is another important factor in making the determination about whether or not a crop needs thinning. This is a practice that takes experience. The percentage of nut-bearing terminals can be developed by observing the number of fruiting terminals counted from an observation of 50-100 random terminals on a tree.

The major mistake most growers make when attempting to fruit thin for the first time is that not enough nuts are removed. When shaking begins, don’t be alarmed by the number of nuts that fall. Trees should be shaken two to three seconds at a time, evaluated, and then shaken again if needed. This process should be repeated until the operator has a feel for how hard to shake to achieve the desired results.

Increased profit potential through enhanced size, quality, and return crop has so far been shown with mechanical fruit thinning on Cape Fear, Creek, Pawnee, Schley, Stuart, Sumner, Kiowa, Cheyenne, Shoshoni, and Mohawk. This does not mean that the practice is not profitable on other cultivars, but simply that it has not been adequately tested for those cultivars not mentioned. It is likely that most pecans with fruiting characteristics similar to those previously mentioned would respond favorably.

An instructional video on mechanical fruit thinning can be purchased here