January 2020 so far much warmer than normal

In spite of the recent cold weather, 2o2o has gotten off to a toasty start across the Southeast, with temperatures running several degrees above normal across the region. Since warmer weather is expected to return to the area before the end of the month, it’s likely that January will end up significantly above normal. Precipitation has been more variable across the region, with northern areas where the storm track has been parked receiving more rain than normal, leaving southern areas fairly dry.

Early February looks to go back towards more seasonal or even below normal temperatures. Wetter than normal conditions are expected to continue, although concentrated on the southern half of the region. 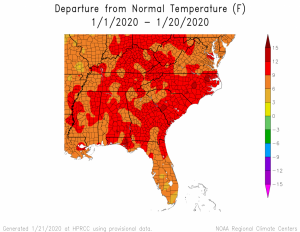 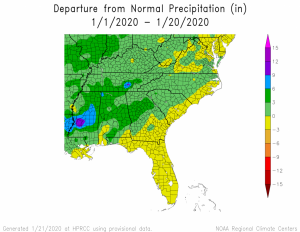