Abnormally dry conditions expand in NC and appear in AL

The latest Drought Monitor, released this morning, show that while there is no change in the amount of drought this week, areas of abnormally dry conditions have appeared in Alabama and the far western panhandle of Florida. They have also expanded to cover a good portion of eastern North Carolina.  We’ll be watching to see if additional expansion occurs in next week’s map as those areas are not predicted to get a lot of rain. 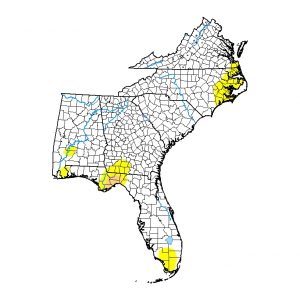