Australian bush fires “too big to put out”

In current climate news around the world, one of the biggest has been the continuing intense bush fires that have plagued eastern Australia, decimating the wild habitat of koalas and bringing thick smoke to Sydney and other coastal cities. The fires, like our fires in the Southeast in 2016, were driven in part by extreme drought conditions and are being exacerbated by strong winds. You can read more at the BBC here and The Guardian here. 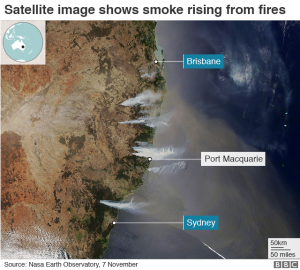