Extreme drought is removed from the Southeast, but drought is still growing in some areas

Today’s Drought Monitor shows some fairly widespread improvements in drought over the region since last week. Many areas received significant rains and showed a one-category improvement in drought status. Other areas stayed at the same level. A few areas actually experienced worse drought conditions this week and small expansions in severe drought were seen in south central Georgia and north central Florida.  Most areas of the region should see an inch or so this week except for the Florida peninsula and western Virginia, so more improvements may be seen in the next map. 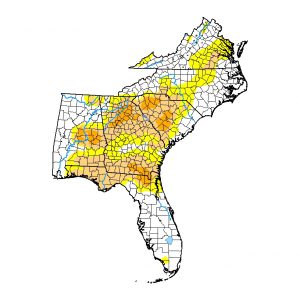