What a difference a week makes

A week ago drought was expanding across the Southeast and many farmers were desperately hoping for relief. It’s now a week later and that relief has come for many parts of the Southeast from the one-two punch of a slow-moving warm front and Tropical Storm Nestor, which traversed the region Friday night through Saturday night. Some places received over 6 inches of rain, perhaps a little more than they wanted. The driest parts of the region are the southern tip of Florida and northwestern Alabama, which largely missed the two rain events. In the attached map from https://water.weather.gov/precip/, you can see the band of heavy rain from the frontal event in central and southern Georgia along with more widespread rains of two inches or more across a lot of the Southeast from Nestor. With all this rain we can expect to see improvements in the Drought Monitor when it comes out on Thursday. Keep in mind that more rain is in the forecast this week, with a cold front moving through the region Monday into Tuesday, and a potential Gulf low forming in the western Gulf later this week and bringing more rain to the region over next weekend. 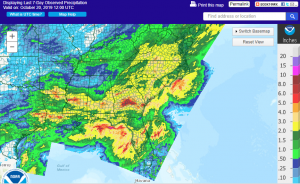