With just a couple of days left in the month, October 2019 looks like it will be the warmest on record for a number of stations in the Florida peninsula. Many other parts of the Southeast can expect to see one of their top five warmest, according to the statistics from the Southeast Regional Climate Center’s Perspectives tool at https://sercc.com/perspectives. On this map, most stations show two sets of numbers. The bottom one lists the ranking for the current station location (often at an airport), and the top number indicates the ranking for the entire threaded record for all official stations at that location (usually a combination of city and airport records). Either way, rankings in the top five are common across the Southeast. 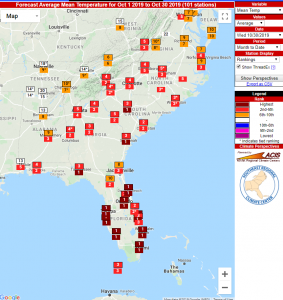