Two weeks ago, the Atlantic tropic season was very slow and sleepy. Dorian was not even formed until August 24. What a change we are seeing now! Not only is Dorian making its way up the East Coast, but several other systems are in various stages of development right now. Tropical Storm Fernand was named today in the western Gulf of Mexico, but fortunately for us in the Southeast is moving west and won’t affect us at all. Tropical Depression 8 has formed in the eastern Atlantic Ocean and is expected to grow further. A low pressure center in the central Atlantic has a 50 percent chance of developing into a tropical storm, and a new wave off of Africa has a 70 percent chance of developing over the next five days. That last one may become a storm to watch in the future, but it has a long ways to go over the open ocean before it becomes a threat (if it does). The second half of the tropical season could be a lot more active than the first half, which would verify NOAA’s prediction of a normal to above-normal year for the number of hurricanes in the Atlantic Basin.

Meanwhile, Dorian is chugging slowly up the coast. The latest models have kept it near the coast but offshore at least until it gets near the Carolinas. However, it is already having effects on the shoreline, with some significant erosion already reported, as seen in the picture below from Tom Skilling’s Facebook page: This is erosion already being observed on Isle of Palms near Breach Inlet on the South Carolina Coast. Photo courtesy of meteorologist Shea Gibson of WeatherFlow based in Charleston, SC. Storm surge ahead of Dorian could reach several feet along the Georgia coast, with significant wave action on top of the surge adding to the impacts on the shore. This coastal erosion could stretch from central Florida all the way to the Outer Banks of North Carolina, attacking beaches, dunes, and houses and other buildings along the waterfront.

Scientific American addressed the problem of increasing erosion on shorelines in a recent article here. Because there is so much infrastructure on the coasts (refineries, shipyards, large cities, and military bases) the losses in the future with a higher sea level and potentially stronger and slower hurricanes will be much worse in the future. A new model is including these impacts in its calculations of the potential future damage caused by climate change. 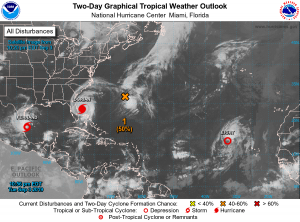 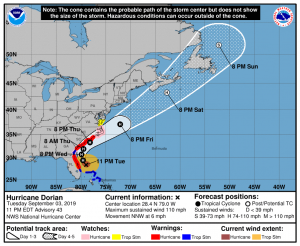 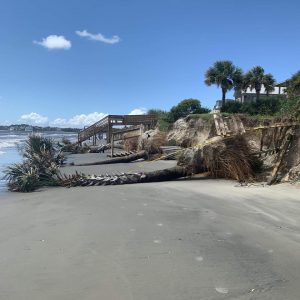 This is erosion already being observed on Isle of Palms near Breach Inlet on the South Carolina Coast. Photo courtesy of meteorologist Shea Gibson of WeatherFlow based in Charleston, SC