Farmers are a key part of dealing with climate change

A new IPCC report was released yesterday, and it has caused quite a stir in the international media. We know that agriculture, both crop and livestock production, can contribute to the increases in greenhouse gases in the earth’s atmosphere which will result in warming and other related changes in climate that will affect us all in the future. It does it in a variety of ways, including deforestation and other changes in land use, cattle production, and the use of fertilizers and fuel to grow and harvest crops. But we need to eat, and so farming is an essential part of life on earth.

Fortunately, farmers are also an important part of the fight to reduce the increase in greenhouse gases, and they can also help us adapt to the changes we know are coming. Even better, there are more financial incentives now for farmers to participate, helping their economic bottom line, including things like adding solar power to the grid and being compensated for capturing carbon. Here are a collection of articles which address these issues.

CNN: Scientists say farmers could grow their way out of the climate crisis

Project Drawdown: Farming our way out of the climate crisis

The Atlantic: Seven ways to understand the new IPCC report

Rolling Stone: The Climate Crisis is Moving Us Towards a Food Catastrophe

Frontiers in Climate: Opportunities for Carbon Dioxide Remove Within the US Department of Agriculture

Growing Georgia: Who Should Control the Carbon Farming Marketplace? 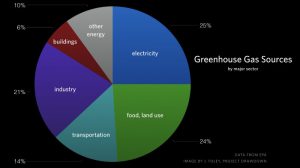