BizNow had an interesting story recently about why coastal developers continue to develop properties along the shoreline, even with the spate of recent hurricanes and with increases in nuisance flooding as sea levels creep up. You can read it here.  The developers aren’t necessarily climate change deniers because they are quite risk averse, but many of them are building on timelines that only encompass holding a property for ten years in the future, short enough that the worst impacts of the changing climate will barely be seen. And they know that people want to live near the ocean and are willing to pay for it.

Farmers often work on short timelines too, especially crop farmers who use rotation and studying the market trends to determine what they will be planting in the next year or two. They are often not concerned about what might be happening in a decade or two unless they are investing in an expensive piece of equipment for a crop that might not be able to grow well in a warmer climate or if they are building a barn for their livestock. But farmers are increasingly aware that the movement towards warmer conditions mean that the growing season will likely be longer for both their crops and insect and disease pests, and they will need to account for that in developing a budget of what they need to spend on pesticides and other agricultural chemicals in the future. 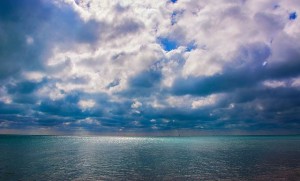