We do know that Irma is continuing to be a very strong and deadly hurricane and the models which seem to be most accurately depicting the storm’s path say that we could see hurricane-force winds into middle and even north Georgia.  The timing of the strong winds provided by the National Hurricane Center suggests that we could see tropical storm force winds as soon as midafternoon on Sunday in south Georgia, although the most likely time is late Sunday evening. For middle Georgia, the earliest reasonable time for those winds is early Monday morning shortly after midnight, although more likely it will be Monday late morning before those strong winds occur.  The storm should continue through the area Monday into Tuesday before exiting to the north.

I will write a more lengthy discussion tomorrow morning after an updated forecast is made in the morning.  As it stands now, this is a VERY DANGEROUS situation for Georgia. I urge you all to follow instructions from your emergency managers carefully and to listen to National Weather Service and National Hurricane Center forecasts for the latest information.  The computer models are still showing some signs of moving the track back and forth so adjustments to the forecast are likely to continue over the weekend. 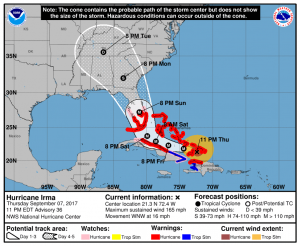 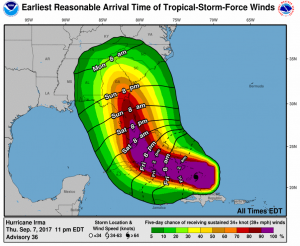