While it is still raining in Houston, we know already that enough rain has fallen there to break the US rainfall record of 48.00 inches of rain from a tropical storm from TS Amelia in 1978 at Medina TX. A station at Mary’s Creek at Winding Road southeast of Houston has received 49.32 inches of rainfall from Harvey. Obviously, with rain still falling in the area, this may not be the final record, and a committee will have to be convened to check rain gauge accuracy, etc. before a new official record is declared, but there is no doubt that this storm is already one for the record books, with more to come.  You can read more at the Washington Post here.

If you saw the forecasts leading up to this storm, you know that it was not unexpected, in spite of what uninformed media outlets might have you think. Meteorologists knew it was coming because the forecast models are so much better than they used to be, especially with input from the newest satellites.  Here is a post from Dan’s Wild Wild Science Journal in the AGU Blogosphere which discussed the crazy rainfall forecast that was made in the hours leading up to the onset of the storm at https://blogs.agu.org/wildwildscience/2017/08/26/astounding-model-output-leads-forecasts-meteorologists-never-thought-make/. Another story about the forecast (made before the storm hit) is from 538.com: https://fivethirtyeight.com/features/believe-the-meteorologists-harvey-is-incredibly-dangerous/?src=obsidebar%3Dsb_1 .

UPDATE: John Nielson-Gammon, the Texas State Climatologist, has indicated a storm total of 51.12” at HCFCD gauge Q100 (Mont Belvieu, TX) has been measured.  He says “If it stands up, the US (outside of Hawaii) will have passed the 50” measured single-storm rainfall benchmark for the first time.  Still more accumulation possible.” 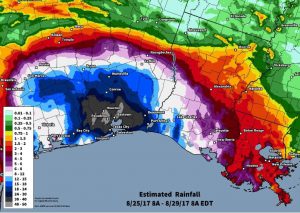