The final Colorado State University hurricane forecast for this year’s Atlantic season was issued this week.  It shows a continuation of expected above average numbers, really not much change from their earlier season forecast.  Warm water in the Atlantic has passed the 80 F threshold needed for storms to form in many parts of the basin, so we should start to ramp up as we enter the heart of the season.  As I write this there are two areas that NOAA is watching for likely development, although the one that is farthest west will probably not hit the US and the one farther east has a long way to go before we have a areal idea of its path if it does develop into a storm.  You can read more at https://weather.com/storms/hurricane/news/2017-hurricane-season-forecast-atlantic-colorado-state-august-update?cm_ven=T_WX_LL_80417_1 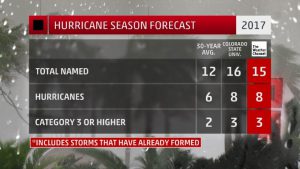