Gotta love that title!  NOAA describes the current active tornado season in their latest blog at Climate.gov here. According to the article, “as of April 17, 570 tornadoes have been reported (preliminarily), which is almost a hundred more than average. The season jumped out of the gate with an incredibly active January: 134 tornadoes in total—more than triple the long-term average—and an especially radical departure from the past three years, during which the average number of January tornados was just 16.” 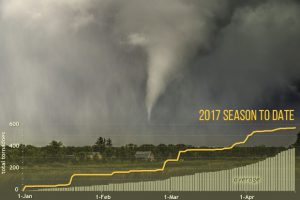