Even  though this has nothing to do with climate and agriculture, I still find this a fascinating study.  The Washington Post published an article yesterday on a new NASA-based study showing major increases in lighting as viewed from satellites in December compared to other times of year.  They attribute it to increases in lighting from outdoor holiday light displays.  The article (link here) shows the increases in light output as measured from sensitive satellite cameras in a series of images from cities in various parts of the country.  I’ve included the one for the Southeast below.  The green areas indicate places where the light is brighter in December than other months.  The biggest changes are in suburban areas outside of the central cities. 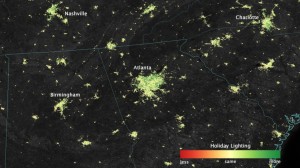