The latest Drought Monitor, released yesterday, shows that abnormally dry conditions have expanded in the Southeast.  Most of the increase is in the Carolinas, where abnormally dry conditions have spread across much of those states.  But other areas are also seeing the effects of the lack of rainfall as well.  So far in Athens GA I have had just two days this month with any rainfall at all (0.03 inches total so far).  The average, according to the statistics at cli-MATE, is an average of 11 days per November with measurable precipitation.  The Athens airport has had 0.06 inches in November, which according to SERCC perspectives tool is the 6th driest for the month to date for the airport records (13th driest if you use the entire threaded historical record for all combined stations in Athens).  Of course, October and November are generally pretty dry months, and most plants have ended their growing season, so impacts at this point are not large, but it is something we will have to watch as the winter recharge period unfolds. 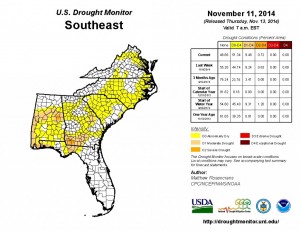