A small area of drought returned to Georgia at the end of July following a record-setting dry July in Alma. The station received only 0.44 inches for the month, much lower than the previous record of 0.77 inches set in 2006. Most of the state received less than the normal rainfall, but cooler temperatures helped keep down soil moisture losses.

Macon was the 10th coldest July on record in 122 years of observations.

A number of temperature records were set this month. Record low temperatures were set on July 17 at Atlanta, Augusta and Alma, and tied at Columbus and Macon. Previous records were surpassed by one to three degrees. Record low temperatures were also broken on July 30 at Atlanta, Columbus and Macon by 2-3 degrees and tied at Athens. The cold conditions were associated with a high-amplitude wave pattern which brought continuing drought, forest fires and warm temperatures to the western US while bringing cool and dry Canadian air to the eastern half of the country.

A record low maximum temperature of 80 F was reported at Brunswick on July 12, breaking the old record of 83 F set in 1975.

Some high temperature records were also tied or broken this month. Alma reported a record high of 99 F and Brunswick a high of 97 F on July 3, equal to the observations from 2006. A record high minimum temperature of 77 F was also set at Alma on July 28, breaking the old record of 76 F set in 2011. 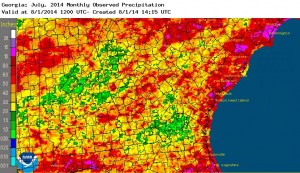 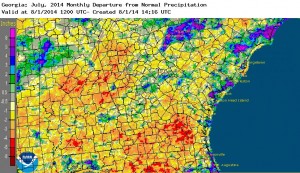 Severe weather occurred in Georgia on eight out of 31 days in the month. All of the wind damage was due to scattered thunderstorms associated with fronts passing through the area.

Crops were progressing across the state, but areas with less rainfall observed significant stress on crops and an increase in pests and diseases. Some delays in planting soybeans after wheat were noted in the drier areas. Lack of rain hindered growth of pastures in some areas but helped promote drying of hay in others.

August has a slightly increased chance of warmer than normal temperatures in Florida and southern Georgia and Alabama but equal chances elsewhere. There are also equal chances for above, near or below normal rainfall. As we enter the most active period of tropical storm development, Tropical Storm Bertha has developed in the Atlantic Ocean but is expected to turn before reaching the coast. However, additional storms are likely to develop this month, but their paths and intensities cannot be determined at this point.

For more information please see the “Climate and Agriculture” blog at https://site.extension.uga.edu/climate/ . Please feel free to email your weather and climate impacts on agriculture to share on the blog to .