The global average temperature for January through July of this year was tied with 2002 for the 3rd warmest year to date since records began in 1880.  But you certainly could not tell it if you live in the Southeast, where colder than average temperatures dominated the first half of the year.  The map below shows the record warm temperatures in the Gulf of Alaska which are contributing to the high-amplitude wave pattern in atmospheric flow that has kept most of the eastern US cool and dry. 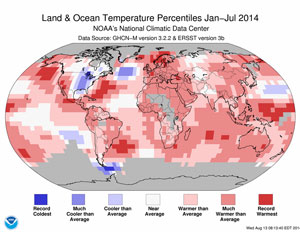