Temperatures in Georgia during June were near to slightly above normal for the entire state, but rainfall amounts varied significantly across Georgia this month. In general, the wettest conditions were in the northwest corner of the state and the driest conditions were in the southwest. Severe weather, mainly scattered wind events, impacted the state on 21 days in June.

No temperature records were set in June this year. 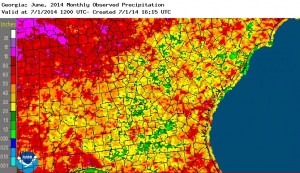 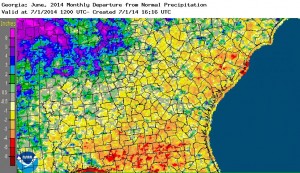 The highest single-day rainfall from CoCoRaHS stations was 4.97 inches near Garden City in Chatham County on June 24, with two other Chatham County observers in Pooler and north of Savannah reporting 4.72 and 4.71 inches on the same day, respectively. The highest monthly total rainfall was 10.14 inches, observed 10 miles north of Ellijay in Gilmer County, followed by 9.77 inches measured west of LaFayette in Walker County and 9.60 inches set ENE of Helen in Habersham County.

The CoCoRaHS network observations for Chatham County on June 24 show the spatial variation of rainfall across the area in the map below.

Severe weather occurred in Georgia on 21 out of 30 days in the month. Most of the reports were wind damage associated with scattered thunderstorms, but on several days early in the month, organized systems of storms called derechos blew into Georgia from northwest towards the southeast, causing widespread damaging winds. One EF-1 tornado was observed on June 8 in Troup County, moving from northwest to southeast and damaging trees, cars, and a greenhouse. The National Weather Service report on this storm can be found at https://www.srh.noaa.gov/ffc/?n=20140608_tornado.

Crops across the state were generally doing well and progression of most crops was similar to last year. Regions that were wetter experienced more problems with foliar diseases. By the end of the month farmers in some regions were concerned about the lack of rain and dryness in soil moisture, particularly at the surface.

July has an increased chance of warmer than normal temperatures but equal chances for above, near or below normal rainfall.

For more information please see the “Climate and Agriculture” blog at https://site.extension.uga.edu/climate/ . Please feel free to email your weather and climate impacts on agriculture to share on the blog to .