Catkin (male flower) production has been pretty heavy so far. A large catkin crop does not guarantee a large production of flowers, but most times we have heavy catkin production, we do have some flowers. I had the chance to look at many different cultivars this week. The first thing we noticed is that flowers are showing up consistently on all cultivars. Stuarts are probably the only cultivars that haven’t put out flowers now. We looked at Schley, Desirable, Pawnee, Cape Fear, and Zinner to name a few.

After the hurricane, we thought it would put the trees into an off-year. And actually, the west and east side of Georgia have been in opposite cycles. This would mean a lower crop for GA this coming year. As of now, we are seeing lots of flowers on the tree. This is a sign of a significant crop this year again. 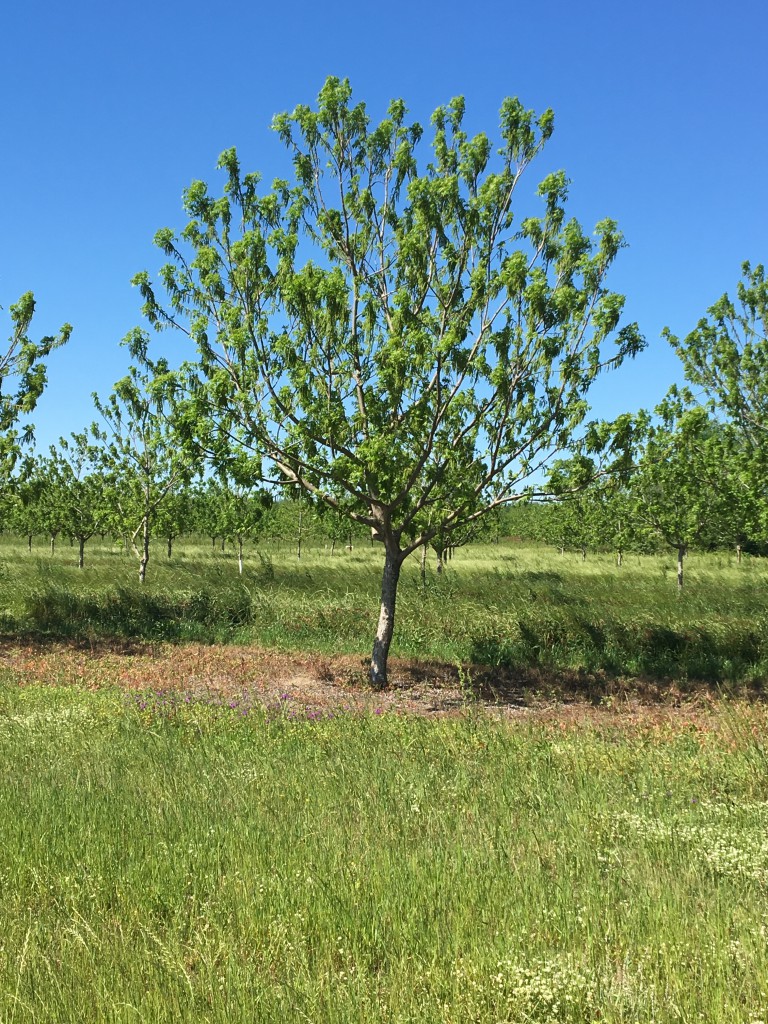 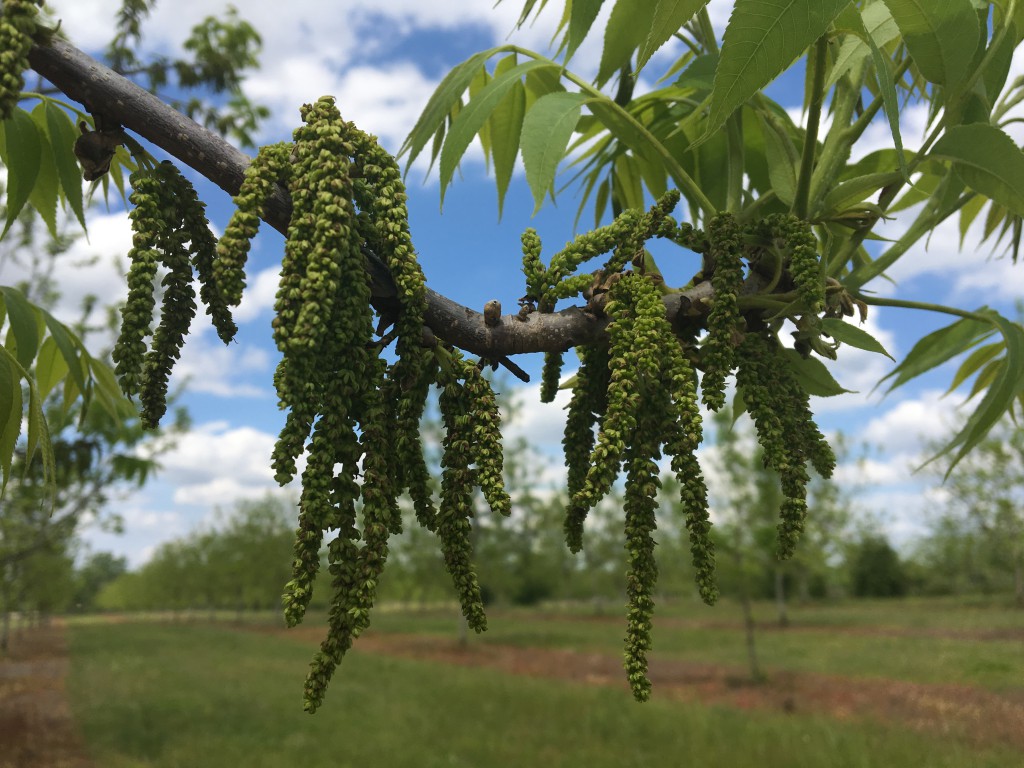 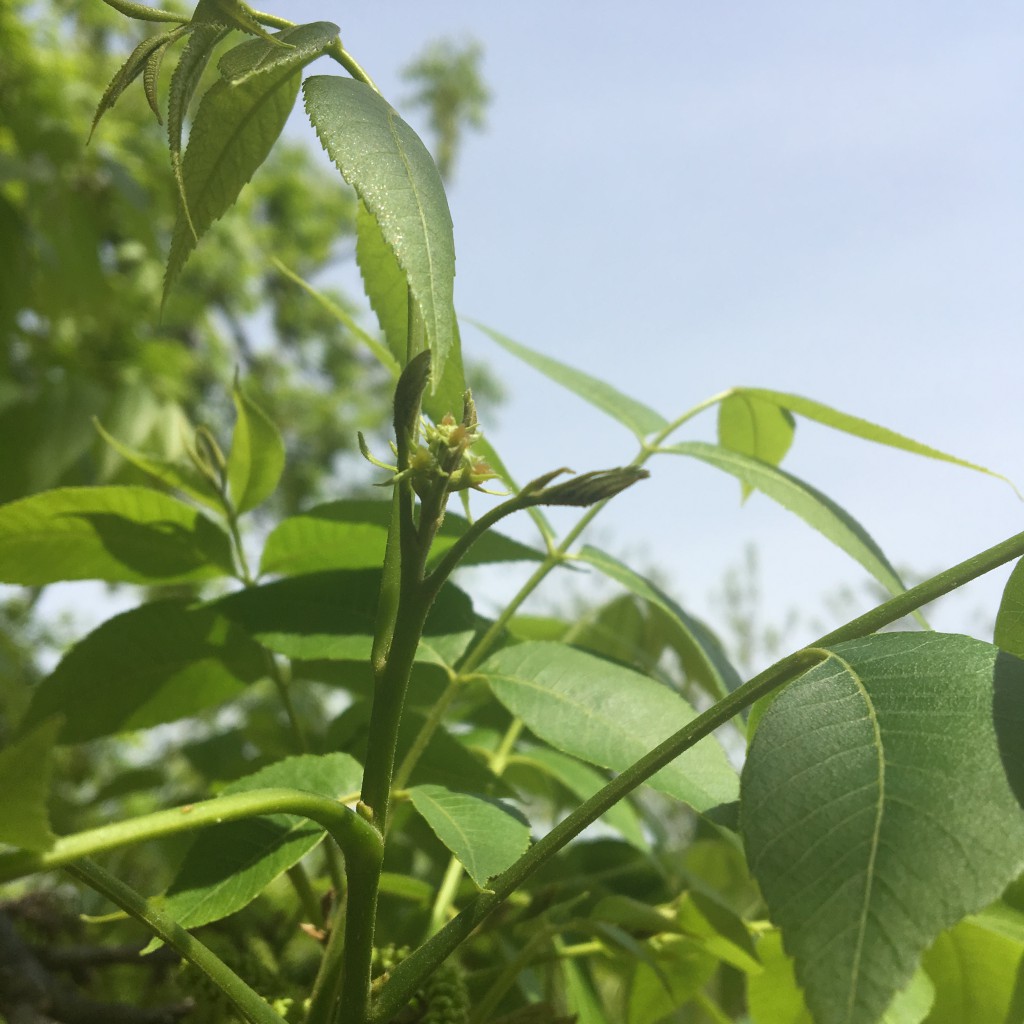 Flowers on Pawnee coming out 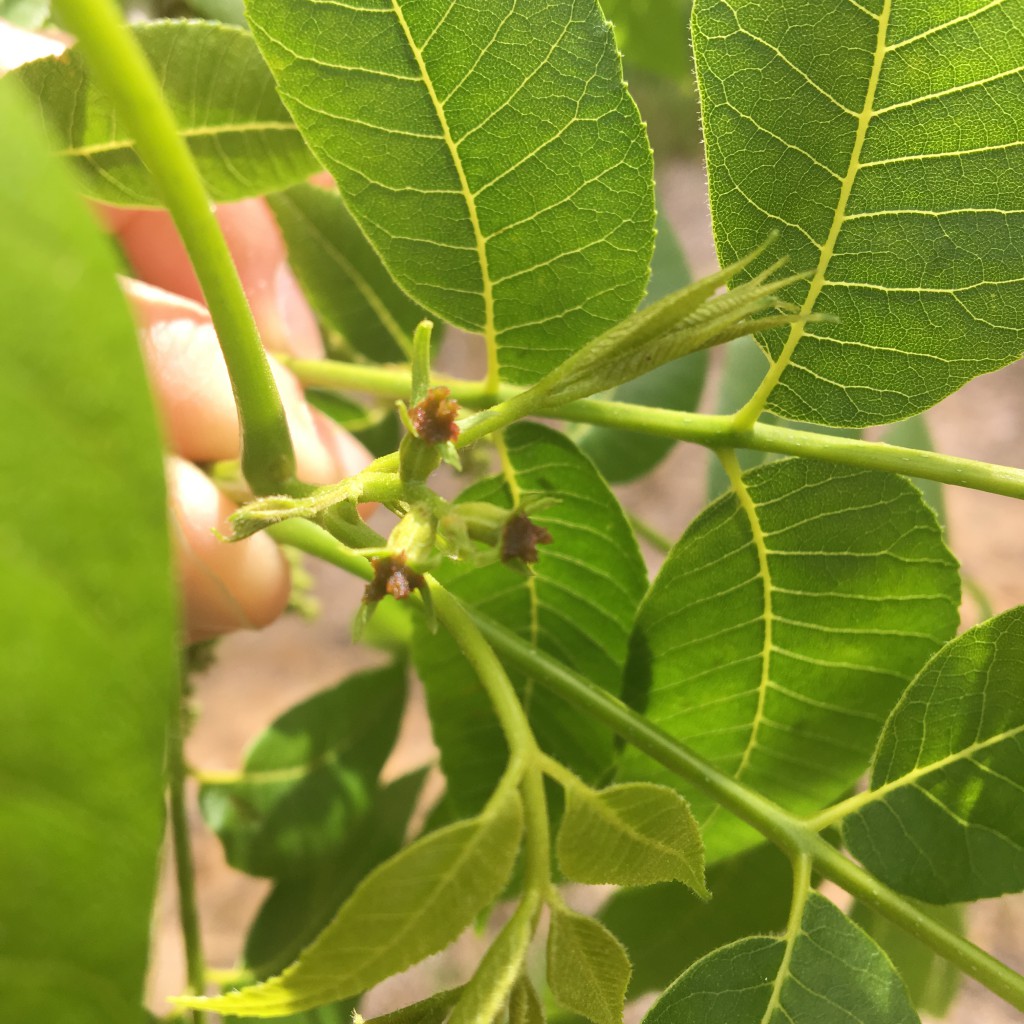 These flowers on Cape Fear are the furthest along we saw. April 17th, 2019

Pecans have nitrogen demand 1) during leaf expansion and 2) during kernel fill. When buds break, it’s pulling from reserve nitrogen. Some time in April we do our first N fertilization. We need to put out about 75 lbs broadcasted in our herbicide strips. Then in June or July, we can evaluate this year’s crop. If we are in an ‘on’ year, we will put out the rest of the 100 and 125 pounds in August. If not an ‘on’ year, just let it roll.

The photo below shows purpling in the leaves. I’ve never seen phosphorus deficiency in pecan, but this is definitely P deficiency. This is a first year tree planted into a hay field. The hay field has not been fertilized much in the last few years, and they put out poultry litter before planting. Since the poultry liter is slow to release nutrients, this P deficiency showed up. For 1st year trees, we wait until June and put out between 1/2 lb and 1 lb of 10-10-10 per tree. This will help with the P, but this tree will be okay. 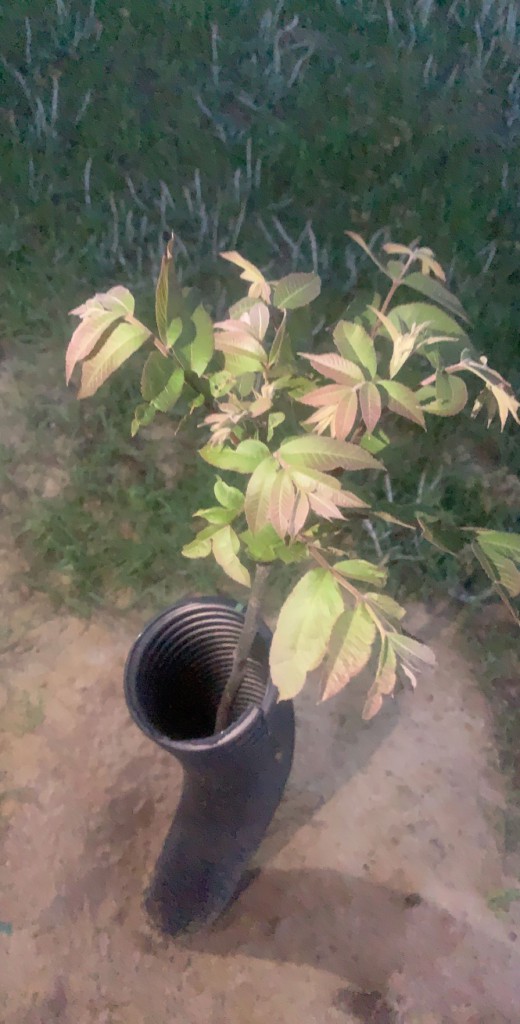 Phosphorus deficiency shows up as purpling in the leaves on a 1st year tree. Photo by Conner Peebles.

We can see tip bud moth damage right now, but any trees over 3 years old won’t sustain real damage. On a 1st or 2nd year tree, I would scout for tip bud moth.

In mature trees, we are seeing spittle bugs. You’ll see their spittle between young branches. Inside that spittle, you can see the nymph spittle bug. Do we spray this? It actually can get problematic, but not usually. Threshold is when you say, “Dang, there is a lot of spittle bugs out here.” It has to be a lot to justify spray. 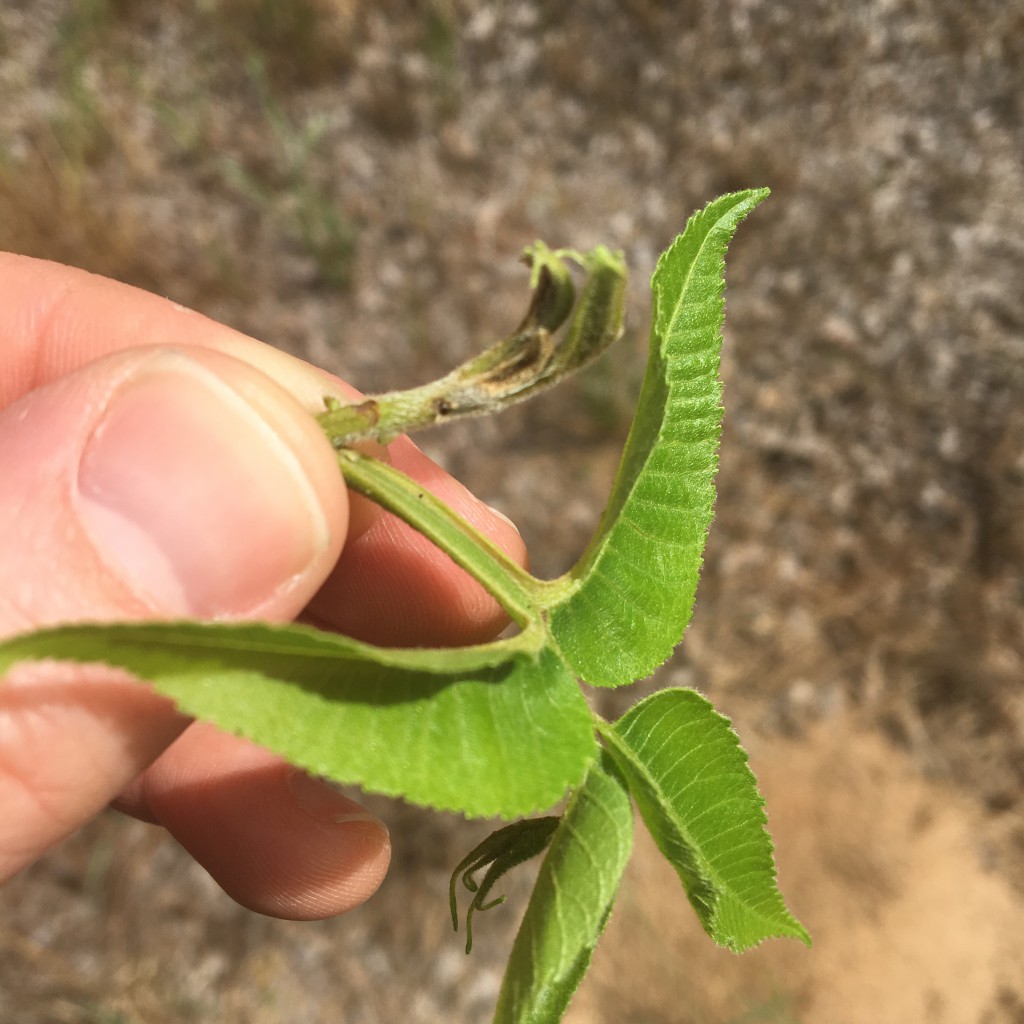 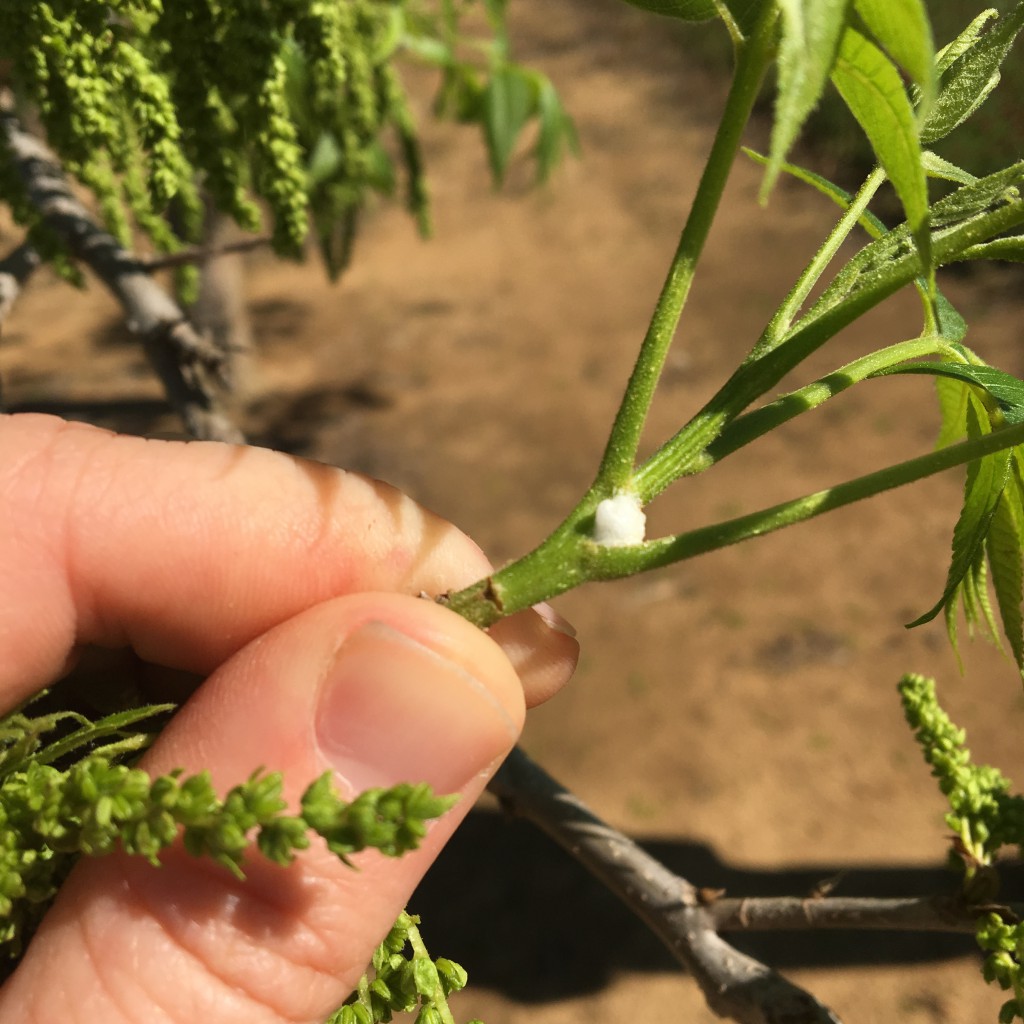 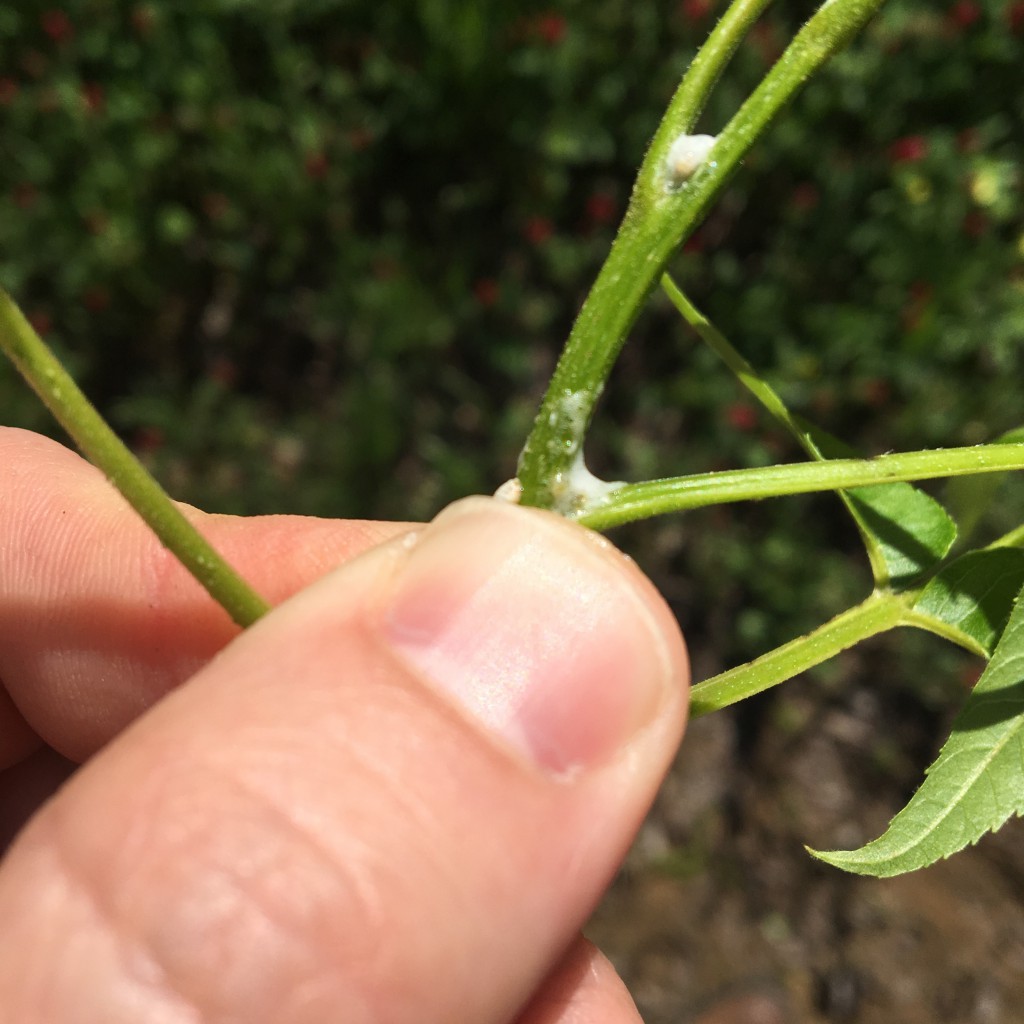 Nymph spittle bug at the upper left of my thumb. 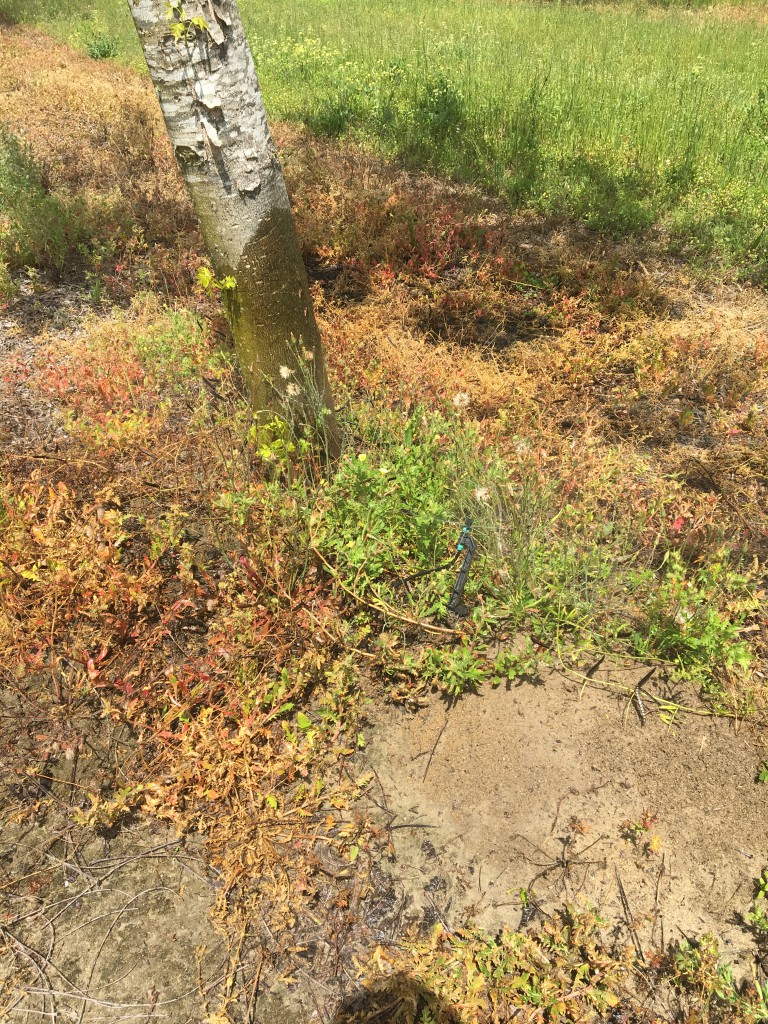 No scab has been diagnosed at the diagnostic lab in Tifton so far, but after this rain and as we near the end of April scab will start being present. These are the Desirables yesterday spraying. They are still in the parachute stage, so I think the timing of the first spray is perfect for these being above U.S. 280. Hwy 280 is our line for scab; anything below is worse than above. We were driving 4 – 5 miles per hour. And on 7 year trees at first spray, we were getting full coverage. So that speed is fine. Once trees get older, larger and more full, we will slow down more to get that coverage. 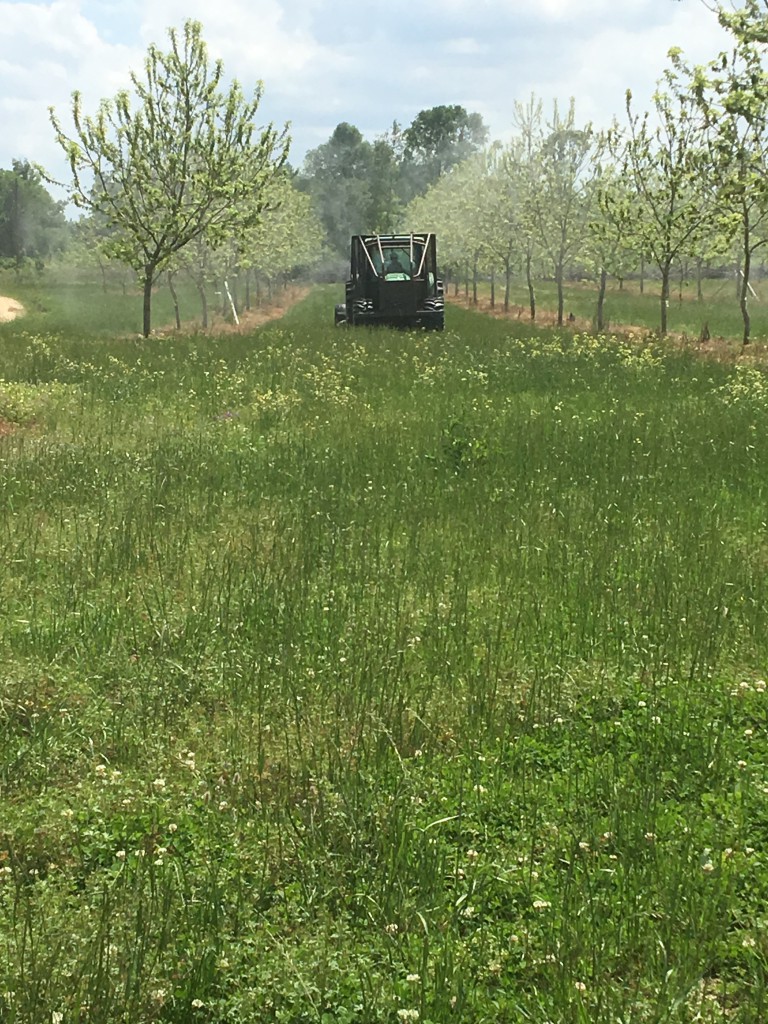