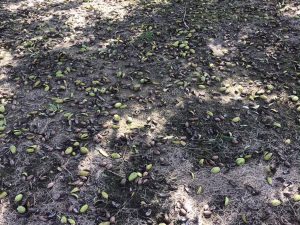 This year’s harvest season is progressing and growers are seeing a problem with many early varieties exhibiting problems with green shuck stick-tights. As growers shake trees many green nuts are falling out still in unopened green shucks. This has been especially noticeable in Pawnee and Oconee, although we have observed it on other varieties as well. Most of these nuts are found to be pops, have poor kernel development, or have sprouted in the shuck.

We saw a similar problem in 2015, primarily on Oconee. During that year we also saw many of the nuts within those shucks harboring kernels that had degraded to a gelatinous mass. This has been observed this year, along with poorly developed kernels, and vivipary or sprouting and embryo rot. As a result, some wagon-loads have been weighing lighter than expected as they are cleaned and the bad nuts are kicked out.

While we do not yet know the exact cause of the problem, it is widespread across the state, which strongly suggests that the problem is environmental in nature. In pulling out environmental data from 2015-2019 and comparing these with the remaining years, it appears that early crop maturity and a hot, dry September were conditions these two problem years had in common. Early crop maturity generally results from early budbreak due to high chilling units below 39 degrees in winter and high heat units in spring, which advances shoot elongation and flower development.

In addition, we know that vivipary and embryo rot (both of which are different stages of the same problem) occur in higher percentages under conditions of high temperatures and high moisture inside the shuck in August/September. Self-pollination also results in higher vivipary and embryo rot. Thus, this may play a role in what we are seeing. The rotten, gelatinous kernels could just be a further degradation of the kernel as it rots.

I have collected Oconee nuts from two locations (an orchard near Marshallville and the UGA Ponder Farm). At both locations nuts within green sticktights exhibited the following kernel categories in the approximate percentages you see below: 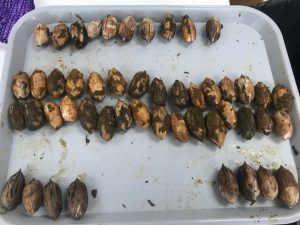 Nut loose in shuck with good kernel but coloring not complete: 8% 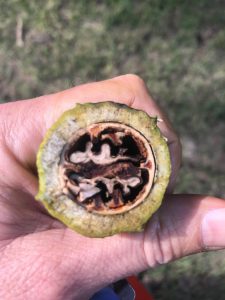 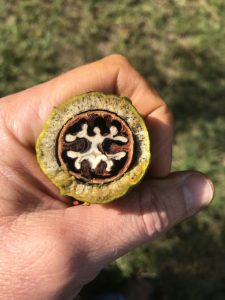 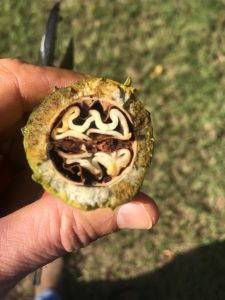 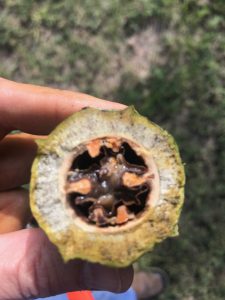 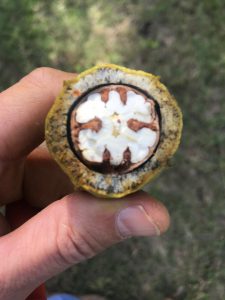 Dr. Patrick Conner is currently running DNA analysis on these nuts to determine parentage. This will allow us to determine if they were self-pollinated or cross-pollinated. This would be the best scenario because we could then address the problem with the addition of early and late pollinator varieties in the orchard to cover the full pollination window. If self pollination is not evident, then environmental conditions may be the most significant contributor to this problem and there is little we can do about that.

I will keep you updated as we are able to learn more about this problem.