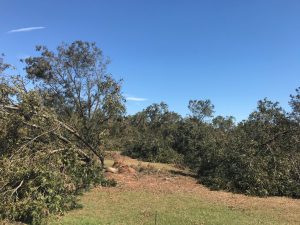 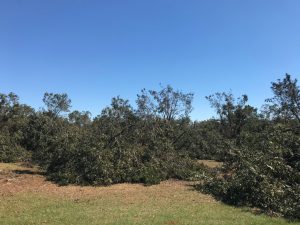 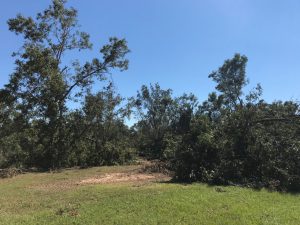 Now that we have had more time to process the damage to pecan orchards and the pecan crop from Hurricane Michael, we can begin to refine the estimates of loss and it does indeed appear to be pretty severe. Of the top 10 pecan producing counties, based on the Farm Gate Survey, only one is outside the main path of the storm. This means that 51% of our pecan production was directly affected. The Dougherty, Lee, Mitchell County area makes up 27% of the state’s acreage.  Realistically, I believe perhaps 75-80% of the crop in the Dougherty/Lee/Mitchell area will be un-harvestable because the damage is so severe they won’t be able to clean up all the debris without running over most of the nuts in most orchards. Even if they can, it will take many of them perhaps 2 months to get this done before they can harvest and quality will likely be degraded by then because the majority of the nuts are already on the ground. 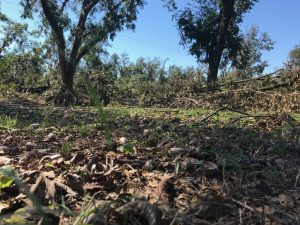 I would say southwest of Albany to Bainbridge the story will be similar, except the damage there is much worse and we can likely count any of the crop not previously harvested (and little of it was harvested) as a total loss. Counties with 15-20% tree damage will likely be able to harvest 70-90% of the crop because the damage is more variable and lighter so they will be able to move limbs, trees, etc, out of the way in many orchards to get harvest equipment by, but this certainly won’t be the case in all of the orchards in those counties. 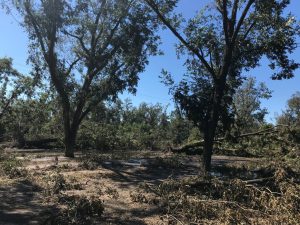 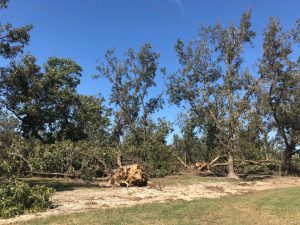 See below for estimates of pecan tree loss for some counties. Counties in bold are in the top 10 for pecan production:

As far as crop loss, I still feel that 50% loss of the state crop is going to be about right considering the heavy losses from Albany and to the southwest, the significant losses in most of our top 10 pecan production counties, and some loss in most pecan orchards. If we get more information we will update these numbers as needed.

In order to be eligible for ECP cleanup assistance, growers should contact their FSA office and sign the waiver to begin cleanup and form 848. Growers should take photos and can begin cleanup after the waiver is signed but should not burn debris until FSA officials have viewed the debris piles. if your county FSA office has not yet opened due to power outages, contact them as soon as possible after they open.