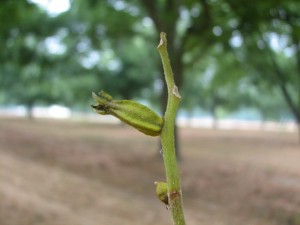 Most growers know that Desirable drops a few nuts each June, which is one reason they tend to bear a crop every year (see previous blog post). Typical drop for Desirable is to lose 30-60% of the nuts in June. However, its still shocking to most growers to go out into the orchard one day and see nuts littering the ground. As expected, we have had our June drop on Desirable. I was anticipating that Desirable would drop fairly heavily this year because the trees didn’t end up dropping heavily last year, and in fact, we had the largest Desirable crop that I recall seeing in 2017.

I have had a number of calls on the Desirable drop over the last two weeks. They did appear to drop heavily this year and some orchards seemed to drop a little more than others but overall, they are down to the typical Desirable crop of terminals with clusters of mostly zeroes, ones, and twos as opposed to threes, fours, and fives. So, most growers with Desirable still have a crop but it is a lighter Desirable crop than last year.

I am also seeing a similar drop on Oconee, which does appear to be heavier than normal this year.

The European Union (EU) revised the definition of the residues included under the limits for the pesticide fosetyl‐al (Aliette) to include all phosphite‐containing products registered as foliar fertilizers and fungicides. A temporary MRL 75 parts per million (ppm) expired December 31, 2015. At that time, pecans were subject to the default MRL of 2 ppm.

The pecan industry received good news in the area with the June 5, 2018 issue of the Official Journal of the European Union (Volume 61).  Pecan, along with other tree nut crops, now have a maximum residue limit of 500 ppm.

Based on data collected by the University of Georgia and the United Stated Department of Agriculture, following UGA Extension recommendations of no more than 5 total applications should keep phosphite residues in pecan below the newly established level.