One of the most often over-looked factors I see regarding production problems in pecan is a consideration of the site where the orchard was planted. Not long ago, I spoke with a grower who had been on a very good fungicide program. His scab control was excellent in most orchards but in a few orchards scab was a problem. As it turns out, most of those orchards in which scab was becoming a problem were smaller orchards of 30 acres or less and surrounded by woods.  The surrounding woods hold moisture in the area and block wind, limiting airflow in the orchard. Sounds too simple to be the source of the problem, but I’ve seen it many times. 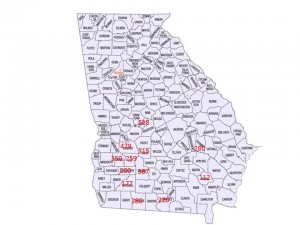 That’s not to say pecans can’t be grown in areas with elevation below 300′. Growers in these areas just need to plant disease resistant cultivars and be more aggressive in managing sunlight and air flow in these locations.