I get calls every year about ‘Desirable’ pecan trees on which the bark is peeling off or sloughing off in large chunks. While it occurs on other cultivars, this is a common occurrence and yet another quirk of ‘Desirable’. When trees grow in diameter the older, outside bark can’t stretch. This is why, on younger trees, the outer bark cracks as they grow. The shape and pattern of these cracks are genetic traits of the tree and varies by cultivar. Older trees with scaly bark simply slough off bark. This process is helped along at times by woodpeckers searching for a meal of insects under the bark. 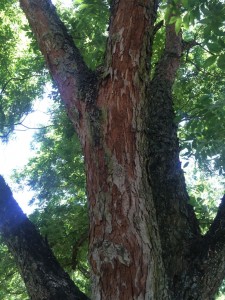 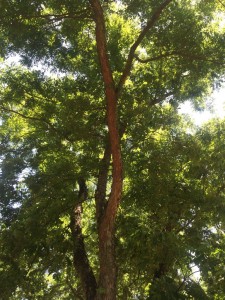 When large chunks of the bark slough off, it can be alarming to see, but it is nothing to worry about. This is simply a natural part of the tree’s growth process. Its just the outer layer of bark coming off, revealing a cinnamon-colored younger bark below, which will eventually take on a normal appearance as the tree continues to grow. This is often confused with lightning damage. As long as the bark doesn’t come completely off, revealing the wood (which will have a smooth, white appearance) underneath, the tree is fine.