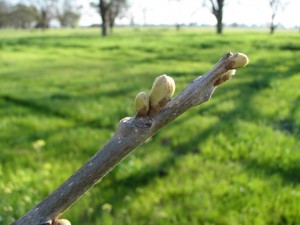 Many fruit trees require a certain number of hours below 45 degrees in order to break down growth inhibitors in their buds, allowing them to begin growth in the spring. The number of chilling hours required to break dormancy varies considerably between and within species.

Peaches may require as little as 100 chill hours to as many as 1200 hours. Like most tree crops, the required number of chill hours for budbreak within pecan varies by variety. Some studies have reported 300 to 500 chill hours were required for ‘Desirable’, ‘Mahan’, ‘Success’ and ‘Schley’ budbreak, while ‘Stuart’ required from 600 to over 1000 hours. Pecan budbreak will occur with fewer than even 100 chill hours, but this may lead to uneven bud-break, and subsequent problems with pollination.

The chilling requirement for pecan can vary with fall conditions. If trees are exposed to cooler fall temperatures (less than 34 degrees), the number of chilling hours required for budbreak increases. Therefore trees of a single variety growing in areas with warm falls and winters would require fewer chill hours than the same variety growing in a colder climate.

Buds on the ends of branches, called terminal buds, tend to have a lower chilling requirement than lateral buds, or those which run up and down the shoot. Therefore, in years following cold winters, the tree will theoretically produce more shoots and potentially more nuts. It is actually the variation in budbreak that appears to be more sensitive to chilling than is the actual timing of budbreak. Thus, the main consequence of warm winters with low chill are usually a sporadic, staggered, and non-uniform budbreak. The onset of new pecan growth in the spring is actually regulated by an interaction of both chilling and heating.

Of the two environmental factors, it appears that heat units in the spring, rather than winter chill units, are the more limiting to the growth of pecan. Under conditions of high chilling, minimal heat is required for spring budbreak, allowing the tree’s shoots to begin growing as soon as possible.  When growth does begin, it moves rapidly. This increases the likelihood that the fruiting cycle will be completed within a relatively short period. Pecan production requires an average seasonal total of over 555 hours of temperatures above 65 degrees F.

A common observance is that the pecan is generally the last deciduous tree to break bud in the spring. This results from its relatively high heat unit requirement for bud-break.  Pecans are sometimes damaged by late spring freezes, even in the southern regions of its range. But, since cooler spring temperatures delay bud-break, allowing the tree to ease into warmer conditions, late freeze damage is not a regular occurrence.

So, what can we expect this year? We’ve had a lot of chill hours this winter. Across the state the chill hours number from over 1000 in the middle Georgia area to nearly 700-800 along the Florida border. In all cases, we’ve already accumulated more chill hours than we’ve seen in several years. We can accumulate a lot of heat units quickly in South Georgia. If its a warm spring, we should have an early bud-break. If its a cool spring, bud-break will be delayed. But, once it does start to warm up, bud-break should occur rapidly and evenly.

One thing to keep in mind about the early arrival of cold temperatures last November is that normally leaves will move nutrients and carbohydrates back in to the tree as the leaves senesce in the fall. We had a hard freeze in mid-November when many orchards still had green, healthy foliage. Within just a couple of days after the freeze, the leaves were on the ground without having an opportunity to finish their job. As a result, trees could potentially be heading into the spring with insufficient carbs and nutrients. The first flush of foliage each spring is fueled by nitrogen stored within the tree and the tree does not begin taking up N until a couple of weeks after bud-break, which is why we normally recommend fertilization at that time. But this year, because the trees may not have the nutrient or carbohydrate supply they normally have, growers may need to consider applying N a little sooner, either just before or at bud-break.