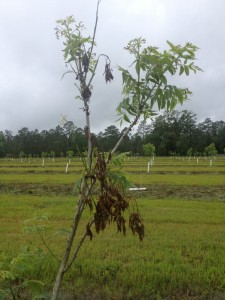 When the temperatures heat up in late May and early June, the calls begin to come in from growers who are noticing the new shoots of their young trees, which had looked so healthy, are beginning to die-back. This is a problem that is not necessarily restricted to young trees and may be triggered by a number of factors, but ultimately results from the tree’s inability to move enough water to these shoots to support their growth and survival. Often, as we have seen recently,  this occurs when we get a hot, dry period all of a sudden following an extended wet period. In this case, the root zone has been saturated for a while and the tree loses some feeder roots to drowning in which they don’t get enough oxygen. Usually the tree is fine until it gets hot and dry and the water demand increases. Sandy soils can be particularly susceptible to this scenario because they dry out quickly, it gets hot, the tree’s water demand goes up, and the tree does not have enough root system left to support the tree’s shoot growth, resulting in die-back. First-year tree’s are often the most susceptible to this problem because they have not yet fully established a root system following transplant, but older trees can suffer from this problem as well. When such die-back occurs, the tree should be cut back in order to relieve the stress the limited root system is putting on the tree. 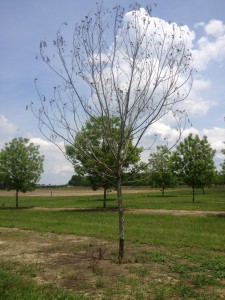 Die-back and sometimes even tree death can occur in larger trees as much as two to three years after the damaging event occurs. Good examples of this can be found in trees that get blown over in a storm and are then propped back up. A similar scenario to the one described above occurs in which the tree simply does not have the root system left to support the tree’s vigorous growth. Again, cutting the tree back can help but its not always a guarantee the tree will survive when the root system is damaged. These trees will sometimes appear fine, then up and die all of a sudden or will die over the winter and fail to bud out in spring. 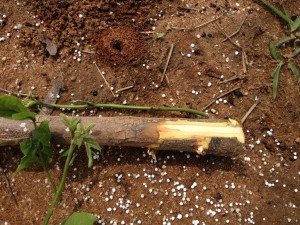 The delayed effects from cold or freeze damage can lead to the same problem. Usually when cold damage occurs, the tree’s vascular system is damaged, usually at the base of the tree. This can be observed by scraping or slicing down the trunk at the base of the tree to expose the tissue underneath. If its green under your scraping or slicing the tissue is ok. If its brown, the tissue is dead. Often with cold damage, you can see a visible line of live and dead tissue as in the photo above. As long as the tree has enough vascular system left to support its growth, even for years, it will continue to grow and the damage will go un-noticed. But as the tree continues to grow and its water demand increases, particularly when it gets hot and dry, it will reach a point at which it can no longer support itself and the tree will die-back. Often with this scenario, the bark/phloem, which moves the sugars up and down in the tree is damaged but the interior xylem or wood is not. The xylem moves water up from the root to the developing tissue. Thus, the tree grows fine for a while. but, when it gets to the point that it needs to move sugars around in the tree, it begins to suffer. This is why the tree may look fine for a while, then dies all of a sudden.