The calls have already started coming in on young pecan trees damaged by budmoth and Asian Ambrosia Beetles. 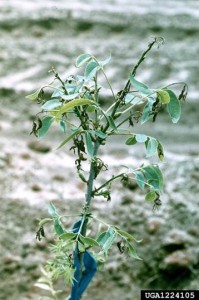 This photo shows budmoth damage caught too late. I dont have a good photo of early budmoth damage. But, you will see frass and very fine silk like spider webbing on the bud if the budmoths are present. The pecan budmoth can damage developing shoots soon after budbreak, deforming trees, and delaying growth.  Manage these pests by application of a broad spectrum insecticide such as chlorpyrifos when shoot growth is about ½ inch long.  Inspect trees for problems and apply an insecticide as needed. 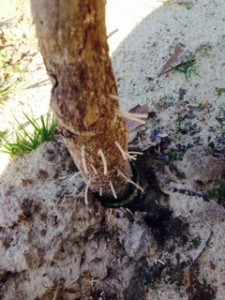 Asian ambrosia beetle moves in quickly, capable of eating its way through an inch of wood per day.

As the insect bores into the tree, it ejects sawdust out of the entrance hole. The sawdust exiting the hole has the characteristic appearance of toothpicks. Scout for this sawdust in early spring.  The beetles introduce fungi into the tunnel, which they carry on their bodies. When the beetle’s eggs hatch, the larvae feed on the fungus. It is the fungus that can kill the tree by clogging the vascular system of the plant causing it to wilt and die. However, most of the time the trees seem to recover fine even if the beetles attack the tree.

Affected trees as well as those trees surrounding affected individuals should receive trunk sprays with a pyrethroid.