A “Mitey” Wormy Week in Peanuts

It came as no surprise on Monday morning when the phone starting ringing with questions about foliage feeding caterpillars, lesser cornstalk borers and two spotted spider mites in peanut fields. Most of the foliage feeding caterpillars we are seeing now are velvetbean caterpillars (VBC). This species is generally easy to kill with insecticides, but left unmanaged, it can completely defoliate peanut. Many of you have probably seen the pictures circulating around in text messages of fields from different areas of the state that have been reduced to stems by VBC. This is completely preventable with regular scouting. Though common, VBC infestations are not in every field, and it doesn’t make sense to spray all our acres just because some of them have pests. Pyrethroids are a very cheap way to eliminate VBC in irrigated fields, but please DO NOT use pyrethroids to target VBC in non-irrigated peanuts. Why?…keep reading. 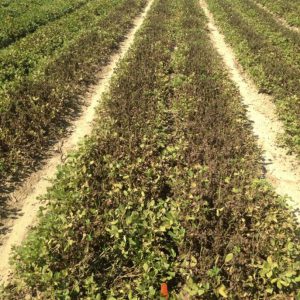 As expected, reports of two spotted spider mites began to roll in this week. In many cases the mites had been present in the field for several weeks but went unnoticed because the peanuts were not being scouted, and growers assumed the plants were simply drought stressed. After some mid-week rains, it became very apparent that something else was wrong. The most important factor leading to spider mite infestations in Georgia peanuts is drought, and we can’t do anything about that. The second most common factor is the use of a pyrethroid insecticide. Spider mites are common now, and applying a pyrethroid to “clean-up” VBC and three cornered alfalfa hoppers can turn into a disaster. Our options for managing mites are few, and infestations are often discovered after they have reached severe status. I am still hearing reports of some folks recommending “Bifenthrin” (there are many different trade names for this active ingredient) for spider mite control in peanut. If a field is less than 10 days from digging, I might consider using bifenthrin for spider mites in peanut. Otherwise, DO NOT use bifenthrin on peanut fields with mites in Georgia. I urge growers to scout all their non-irrigated fields for mites, but prioritize any fields where a pyrethroid was applied in the last 6 weeks. 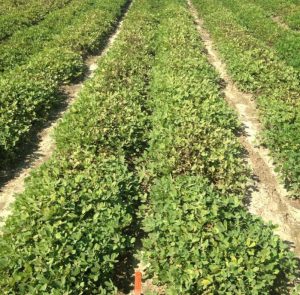 Lesser cornstalk borers (LCB) continue to be active in drought stressed fields, and in many cases these infestations have gone undetected for some time (I suspect many or most are still undetected). The decision to treat fields in late August will be made on a case by case basis. For many fields, it will simply be too late to justify spending additional money on insecticides. UGA Extension agents and specialists will be helping growers make those decisions. Fields that were treated for LCB in a timely manner appear to be holding up well.

For questions about these or other pest management concerns in peanut, contact your local UGA Extension Agent.