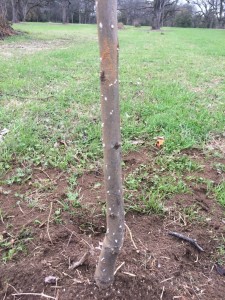 Early February is a good time to start managing for ambrosia beetles. Normally, beetle damage is worse on young trees from newly planted to 6 yrs old. So growers who planted trees this year should check newly planted trees closely for signs of damage by ambrosia beetles (toothpick-like sawdust tubes sticking out of attack holes as seen in photo above). Any form of stress (water-logging, drought, etc.) can stimulate the beetles to attack.  According to UGA Extension Entomologist Will Hudson there are not any preventative actions growers can take to head the ambrosia beetles off, but there are some things growers can do to limit losses.

Dr. Will Hudson Explains below the various things growers can do to limit losses:

The first is trapping for adult beetles to pinpoint when the first flight starts.  This has been highly variable in past studies, ranging from late January to mid-March in south GA. We never found any way to predict the date, so we settled on beginning trapping by 1 Feb as the best plan.  You may miss the first day some years, but not often and usually the real flight is after Feb 1st.  There are several traps that work (google “ambrosia beetle traps”), but the simplest and most efficient is made from a bolt of wood with a hole drilled down the center.  Any hardwood will work, and a branch 2” – 4” in diameter, about 2 feet long will do the trick.  Drill a ½” (+/-) diameter hole down the center as far as you can (but not all the way through) and fill it with ethanol (grain alcohol, not rubbing alcohol; denatured is OK).  Put a stopper of some sort (a cork, for instance) in the hole and then hang the bolt about waist high at the edge of the orchard.  It will probably take several traps per edge, but edges along woodlines are most likely to catch beetles first. 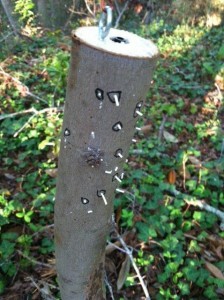 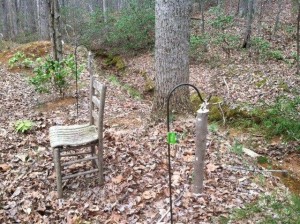 Which brings us to the most important factor, ambrosia beetles are active all year long, and they are strongly attracted to stressed, diseased or injured trees.  Growers should be very alert to any problems with irrigation, especially during hot dry weather.  Keep tractors and other equipment well away from the trees to avoid injury that invites ambrosia beetles and other borers.