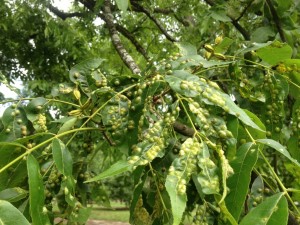 Many of you may have noticed pecan trees with wart-like galls on the leaves. This is the result of feeding by an aphid-like insect called phylloxera, which causes rapid and abnormal growth of young leaf tissue to surround and enclose the female (called a stem mother). Based on the calls I’ve had and observations in the orchards, it appears that phylloxera is more prevalent than normal this year. Although the insects themselves are rarely seen, the stem mothers hatch from over-wintering eggs just after budbreak, usually in April, and crawl to the expanding leaves where they settle down to begin feeding. They begin laying eggs inside the protection of the galls in mid-April. As the eggs hatch and the resulting phylloxera begin to feed, the gall enlarges. Usually in mid-May, the now-matured phylloxera emerge from the gall. Some of these may crawl to another spot on a leaf and produces a second generation of galls.  There appear to be 2 species of phylloxera that infect the leaves—one, called Pecan leaf phylloxera seems to prefer immature nursery and orchard trees. The other, called Southern pecan leaf phylloxera prefers mature trees. In any case, the resulting damage will be the same. 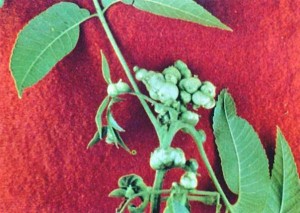 While, not very appealing to the eye, leaf phylloxera galls are usually of relatively minor economic importance unless infestations are severe. However, stem phylloxera attack foliage, shoots, and even the fruit of pecans and can be much more damaging. Usually they are seen in the peduncle (the short stem bearing the nuts) at the tip of the shoot or in the nuts themselves. Heavy infestations can cause significant damage to the nut crop and the accompanying weakened shoots reduce tree vitality and may reduce the following year’s production as well.

Once you see the galls on the tree, it is too late to do anything about the current year’s infestation. Control measures must be taken at or just after budbreak. Commercial orchards can spray imidacloprid or chlorpyrifos products from bud break until the new growth reaches about 1″ in length. Orchards with a history of heavy infestation may require a second application 10-14 days later if chlorpyrifos is used. At present, there are currently no effective methods for control in a yard-tree situation. Soil drench applications with imidacloprid to date have been limited in their effectiveness.

Another unfavorable side-effect of phylloxera is increased likelihood of problems with hickory shuckworm. Shuckworm adults apparently find phyloxerra galls a suitable place to lay their eggs. As a result, damage from first-generation shuckworm can be significant in orchards with heavy phylloxera infestations. Therefore, growers will need to treat for shuckworm in this situation about this time. Intrepid, Dimilin, or Belt are all good options for shuckworm.

Our entomologist, Will Hudson asked me to pass along word that there are currently some technical difficulties with the pecan hotline (1-800-851-2847). We will let you know when these are resolved.