As expected, drought decreases across most of Southeast in response to plentiful rain

The rain from a slow-moving warm front, coupled with the rain from TS Nestor last weekend, has significantly knocked back the drought that has been expanding across the region. There are still a number of pockets of severe (D3) drought scattered across the area, but there have been significant reductions in many places too. In some locations with the heaviest rain, the Drought Monitor reduced the drought by two levels, which is rare but not surprising considering the amount of rain those areas got. The biggest reductions were in SE Alabama and southern Georgia, where rains of up to 5 inches from a warm frontal event improved conditions there. The maps below show the current drought level as of this morning as well as the change from last week. The rain will help farmers prepare to plant winter grains and pastures but may be too late to get another cutting of hay in before the first frost occurs. 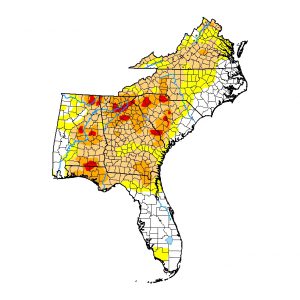 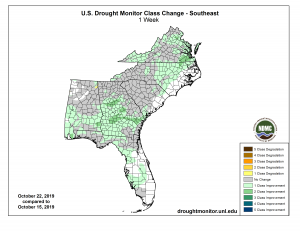