Only slight changes to drought this week

The latest Drought Monitor, released this morning, shows that there were only slight changes to the drought in the Southeast this week. Some states slightly increased their areal coverage while others decreased, but overall the changes were very small. Based on the current rainfall forecasts, I expect that there may be some slight improvements in next week’s map, but no major changes. 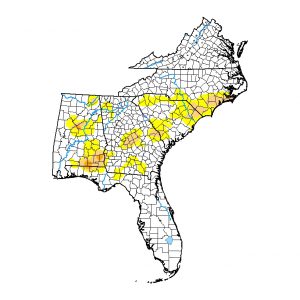