July 2019 warmer than normal across Georgia; most areas dry

Temperatures across most of Georgia in July 2019 were warmer than normal across the state. Most areas of the state were also drier than normal, but Albany was just above normal and Alma was more than 2 inches wetter than normal, mainly due to heavy rain which occurred on July 4 and 5. 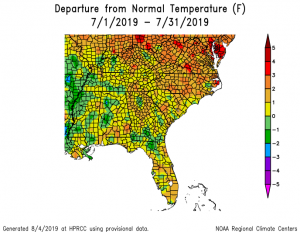 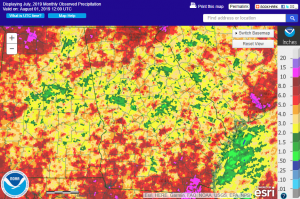 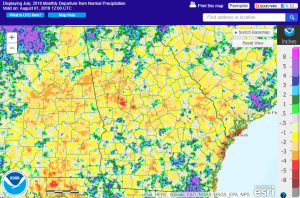 No daily rainfall records were set in July in Georgia.

Drought conditions at the beginning of July gradually eroded over the month of July but pockets of moderate drought remained by the end of the month. A small area of severe (D2) drought occurred briefly along the southwest border with Alabama but was removed by the last week.

Severe weather occurred on thirteen days in July. No tornadoes were reported and only a couple of isolated hail reports were made; the rest were due to strong winds.

The dry conditions caused problems for some farmers who were hoping for more rain to fill soybeans and corn. Most corn was ready to harvest by the end of the month. Forage producers were delaying cutting to increase their yields in the dry conditions, although the hay was drying well once cut. Cotton also suffered from the dry conditions, leading to concerns about the fall yield due to uneven growth of bolls on the plants.

The outlook for August 2019 and for the August through October period shows that the temperatures for the next three months are expected to continue to be warmer than normal across the state. Precipitation shows no trend towards wetter or drier conditions for the 3-month period. A lot of the uncertainty depends on when the tropics wake up and start sending more weather systems towards the Southeast, which should happen later in August and September as the peak tropical season approaches.