The latest global climate report was released today by NOAA for June 2019. It shows that for the earth as a whole, the month was the warmest June since records began in 1880. The South Central US was one of the few places that was cooler than normal, but the Southeast was warmer than normal. The Arctic ice cover was the second smallest for June and the Antarctic ice cover was the smallest June amount on record. The year to date, January through June, was the second warmest on record after 2016.  You can read more at https://www.ncei.noaa.gov/news/global-climate-201906.

For a deeper take on what it means for the future, you can read this article in the Washington Post  at https://news.yahoo.com/june-warmest-june-ever-recorded-100000992.html?.tsrc=daily_mail&uh_test=1_12. 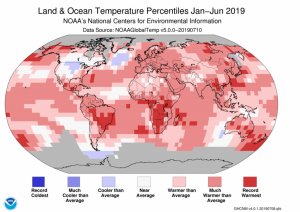