August 2017 near normal across Georgia 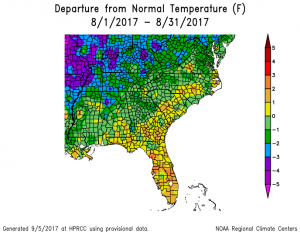 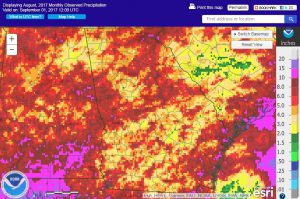 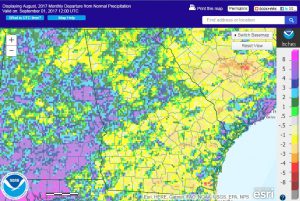 The highest daily rainfall total from CoCoRaHS observers was 4.16 inches nsouth of Greensboro in Greene County on August 9, followed by 4.02 inches measured near Dunwoody in DeKalb County on the same date.  For the entire month, the highest total was 12.32 inches measured near Savannah in Chatham County followed by 11.89 inches from an observer south of Riceboro in McIntosh County and 11.04 inches on Tybee Island, also in Chatham County.

Isolated wind damage from strong thunderstorms was reported on nine out of 31 days this month.

The dry conditions in south and east Georgia caused a recurrence of abnormally dry conditions by the end of the month, but that is expected to be temporary as tropical rains should eliminate any shortfalls in the next few weeks.

The drier areas of the state were experiencing crop stress during the last two weeks of August, with additional rain needed for moving along the cotton and soybean harvests.  However, the corn harvest benefited from the dry conditions.  Livestock producers were also worried about the lack of moisture which is needed to establish fall pastures. Whitefly pressure in many areas was intense and was linked to overwintering due to last winter’s mild conditions. Rain in grape-growing regions contributed to the development of rot in some vineyards.

For more information please see the “Climate and Agriculture” blog at https://site.extension.uga.edu/climate/  or visit our web page at https://www.gaclimate.org.  We are now also on Facebook at SEAgClimate and on Twitter at @SE_AgClimate.  Please feel free to email your weather and climate impacts on agriculture to share on the blog to .